From now until November, London will be celebrating their most famous playwright during the World Shakespeare Festival. During the next six weeks of the festival, all of the Bard’s 37 plays will be performed marathon-style at the Globe Theatre in 37 different languages, including Swahili, Maori, and even sign language. If you’ve never had the experience of watching Shakespeare at the Globe, there couldn’t be a more magnificent time to visit London than right now!

The festival kicked off on Monday, April 23–which just so happens to be the Bard’s birthday–with a Maori performance of “Troilus and Cressida” by the Ngakau Toa theatre company from New Zealand. With little in terms of set and costumes (but plenty of tattoos flesh!) and despite the foreign language, the universal themes of love and betrayal of the story still shined through.

Other performances at the Globe that are sure to attract large crowds include the South Sudanese Theatre Company’s “Cymbeline” on 3-4 May, an Afghan performance of “The Comedy of Errors” on 30-31 May, and the National Theatre of China’s rendition of “Richard III” on 28-29 April. Also, the Deafinitely Theatre group will perform “Love’s Labor’s Lost” in British sign language at the Globe on 22-23 May and the Belarus Free Theatre will perform “King Lear” on 17-18 May.

While the Globe may be in the spotlight of the festival, other London theatres will also be getting into the act, including the Roundhouse, National Theatre, the Riverside Studios, and the Royal Opera House. There will also be other events and exhibits celebrating Shakespeare, such as the Living Walls exhibit at the Royal Shakespeare Theatre and an exhibition at the British Museum that looks at objects from the playwright’s period.

And instead of staying at a London hotel, our short-term apartment rental give you a much more luxurious accommodations close to all the World Shakespeare festivities. For example, our one-bedroom Mayfair apartment sleeps four and is only a 15 minute a walk to the Globe in Shepherd Market. Or if you’d rather take London’s public transport, the Globe is only four stops away on the Jubilee Line from the nearby Green Park station. Other nearby apartments include the elegant two-bedroom Sloane in Chelsea and our luxurious three-bedroom Eaton Cottage apartment. 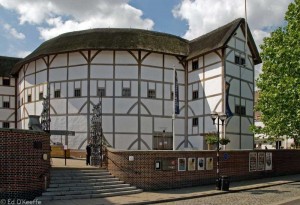 While the Globe may be in the spotlight of the festival, other London theatres will also be getting into the act, including the Roundhouse, National Theatre, the Riverside Studios, and the Royal Opera House.

Finally, here is the contact information for some of the London venues hosting the World Shakespeare Festival so you can book your tickets before they sell out:

Posted on Wednesday, April 25th, 2012 at 2:59 pm in London Events. You can follow any responses to this entry through the RSS 2.0 feed. You can leave a response, or trackback from your own site.