International Arts and Antiques at Olympia 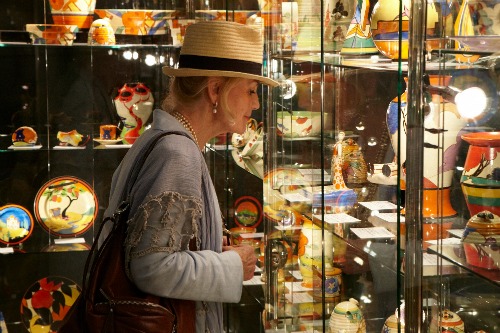 A buyer of taste seeking the extraordinary amongst some Clarice Cliff ceramics at the International Arts and Antiques Fair at Olympia.

I am assuming that you’re reading this blog because you are individuals of good taste, travellers who seek the extraordinary as well as elegance and élan. It’s a good thing you are because London has all three in bucket loads. And the recent International Arts and Antiques Fair at Olympia in Kensington stands testament to this.

Every year in June the crème de la crème (as Miss Jean Brodie would say) of art and antique dealers from Britain and the rest of the world come to London. Over ten days the most astute international and local collectors, dealers and buyers flock to purchase the unique and beautiful. Aristocrats and royalty rub shoulders with celebrities whilst admiring Renaissance bronzes from G. Tomasso or Cartier jewellery at Anthea AG Antiques. The quality of the objets d’art on sale is remarkable. 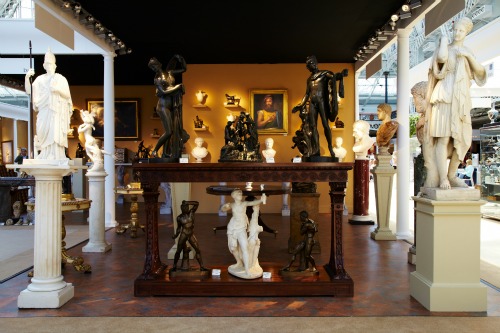 A taste of some of G. Tomasso’s magnificent bronzes and other statuary.

But before I wax lyrical about the art and antiques, a comment about the setting is called for. The 120-odd year old Olympia exhibition centre in Kensington is one of those Victorian spaces designed specifically to host the grand exhibitions so beloved of those said Victorians. A finely decorated metalwork skeleton is the frame upon which acres of glass fill the room with light. If medieval cathedrals could breed with a garden greenhouse then these 19th-century wonders would be the result. 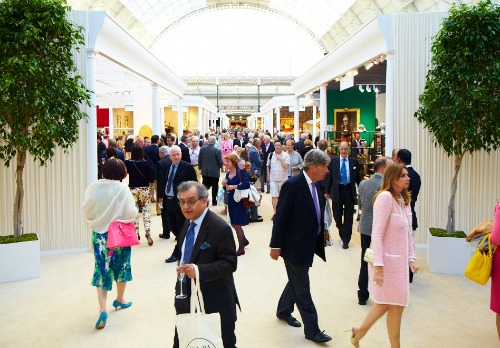 Could there be a more refined setting for one of the world’s most famous art and antique fairs? 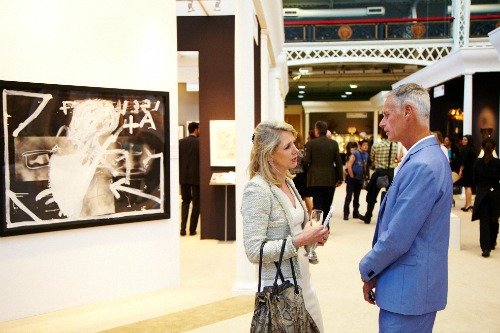 Contemporary art and champagne during the International Arts and Antiques Fair at Olympia.

And now for the art. Ooooh, so much to choose from. But wait! I hear an interjection…

“Oh, but my particular penchant is sooooo niche you’ll never find it here. I only collect textiles from Antiquity, don’tcha know?”

I return to my original point: this is London. We do the extraordinary here. And in your particular, rather niche instance you’d better turn to Esther Fitzgerald, exhibitor at Olympia this year and dealer in rare textiles.

Ahem. After that, back to the art. Amongst my personal highlights were one of the contenders for the LAPADA “Object of the Year”, the Wilby House Casket. This is a very fine embroidered English casket c. 1660 exquisitely depicting a hodge podge of biblical and mythological stories. And all in contemporary dress. And by contemporary I mean 17th century, not the skinny jeans of 2013. Tisk tisk. What a thought…

I also adore the aesthetic of Josephine Ryan, a dealer based in Chelsea and designer of one of the Campaign for Wool’s rooms at Somerset House earlier this year. As ever, her cool hued palette was a stunning counterpoint to the graceful religious statuary and idiosyncratic furnishings that define her style.

I have a thing for Medieval and Early Modern art from Venice. And low and behold, there was a Venetian cassone (cah-soh-neh)– an elaborately decorated marriage chest – from the early 16th century courtesy of Jan Roelofs Antiquairs from the Netherlands. 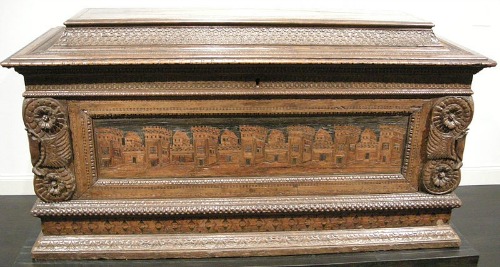 This is a cassone. Granted a Florentine one by Domenico del Tasso rather than the lovely inlaid Venetian number I saw at Olympia but you get the gist.

And did you know that there’s a whole market for elaborate majolica stoves from the 18th and 19th centuries? Nope. Neither did I. I’m glad there is one though and that Rita Tuci from Italy is a purveyor of these monumentally marvelous objects. I might have to rethink my central heating system in order to accommodate at least one … 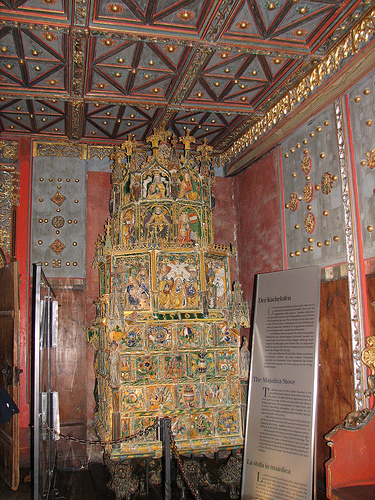 It’s a jolly good thing London Perfect have a number of suitably chic Kensington apartments available between June 5-15, 2014. Because that’s when the next International Arts and Antiques at Olympia will be and, quite frankly, I expect to see you all there.

Can’t wait that long? Don’t fret. If you’re looking for special Christmas presents for your beloved family then head to London November 4-10, 2013 for the Winter Fine Arts and Antiques Fair at Olympia.

What? That’s still too long to wait!? Fortunately there’s the Antiques & Fine Art Fair at Mall Galleries, August 28-31, 2013. And we’ve got a couple of tickets to giveaway to our most discerning and lucky of readers. Just make sure you’re reading this blog on Wednesday July 31 for more details …

Posted on Monday, July 29th, 2013 at 4:29 pm in London Events. You can follow any responses to this entry through the RSS 2.0 feed. You can leave a response, or trackback from your own site.

Antiques and Fine Art Fair at the Mall Galleries – And a Little Ticket Giveaway!

Spirit of Christmas Fair in London