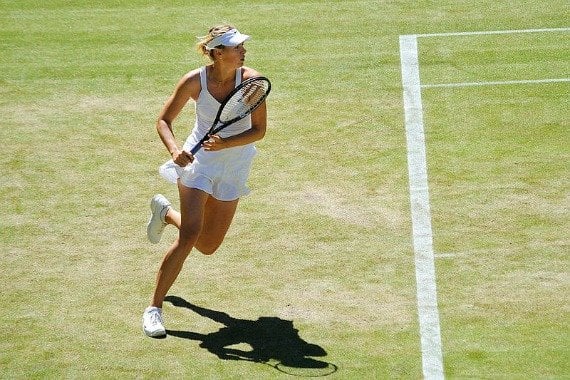 Maria Sharapova on the Wimbledon lawns in 2009.

Tennis fans, this is your moment. Starting on June 23 and running for two weeks, professional tennis will be delivered up daily for your viewing pleasure down in a rather leafy part of South London. We’re feeling pretty excited!

Yes, Wimbledon has finally arrived. For us Brits, we’ll be watching with baited breath to see if home grown talent Andy Murray has it in him to deliver the Wimbledon Championships Men’s Singles title again. Whilst elsewhere, we’ll be enjoying the likes of Serena Williams, the top seed, serve up against talent such as Maria Sharapova, who famously won the Championship (and beat Williams) when she was a mere 17.

A popular man. Murray signing autographs after his 2013 win.

If you happen to be in London over this time, all the better, for you have the chance to enjoy the pros in the flesh. Even if you don’t already have tickets, Wimbledon is one of the few sporting events that still sell tickets on the day, so get there early enough and you may be in luck. Alternatively, if an early start is not on your agenda, then stroll up after 5pm for a return ticket. This will still give you the chance to wander round the courts and take your pick of matches.

Remember to bring your sunnies and hat for discreet celebrity spying, oh and your raincoat and umbrella as this championship is notorious for its unreliable weather. For the full experience indulge in strawberries and cream and a glass of ice cold Pimms whilst you’re there. Summer in London has arrived.

For more on Wimbledon and the history of the Championship, check out our post here.

Posted on Monday, June 23rd, 2014 at 11:52 am in London Events. You can follow any responses to this entry through the RSS 2.0 feed. You can leave a response, or trackback from your own site.