It’s nearly summer here in London and that means Wimbledon is right around the corner! This year the big event takes place from June 29th to July 12th. Each year fans from all corners of the globe descend onto the leafy London suburb to catch a glimpse of their favourite tennis stars in action at what many consider to be the most prestigious tournament of the year. A majority of tickets for Wimbledon are allocated through a ballot system, which closes in December of the year prior to the tournament. However, don’t worry if you missed out on the ballot. You still have a shot at scoring tickets if you join the famous Wimbledon ticket queue!

The Ticket Queue at Wimbledon

The Wimbledon ticket queue is as much a part of the tournament as the grass on the court, a Pimm’s cocktail and strawberries and cream. The atmosphere as people queue up in the wee hours of the morning is unbeatable and something you simply have to experience at least once in your life. Each day during the tournament, 500 tickets are released for Centre Court, Court No.1 and Court No.2. Several thousand Ground tickets are also made available daily that give holders access to Courts No.3-19.

As you might imagine, the tickets for the major courts tend to go quickly. In the earlier part of the tournament you’ll need to start queuing by at least 5.00 or 6.00am. Towards the latter half, many fans choose to arrive the night before and camp out until the morning. While this may not be for everyone, the friendly atmosphere and excitement at the overnight queue is very special. If you don’t fancy camping or prefer not to queue too early, you can usually still get grounds passes if you arrive a few hours before the grounds open at 9.30am. 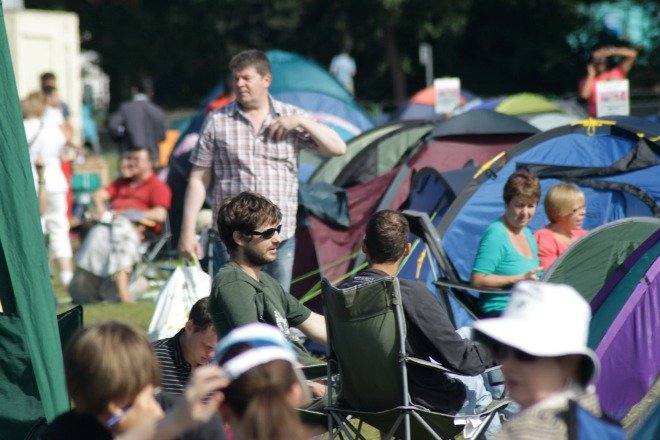 Made it onto the grounds but missed out on major court tickets? You have a second chance at scoring these elusive seats at the Ticket Resale kiosk, located north of Court 18 towards the top of St Mary’s Walk. As ticket holders leave early for the day, they are asked to hand in their tickets before they leave. These tickets are then resold beginning at around 3.00pm. Centre Court seats are resold for just £10, while Show Court tickets are available for just £5. For the best chance at getting these tickets, queue starting at 9.30am when the grounds opens. 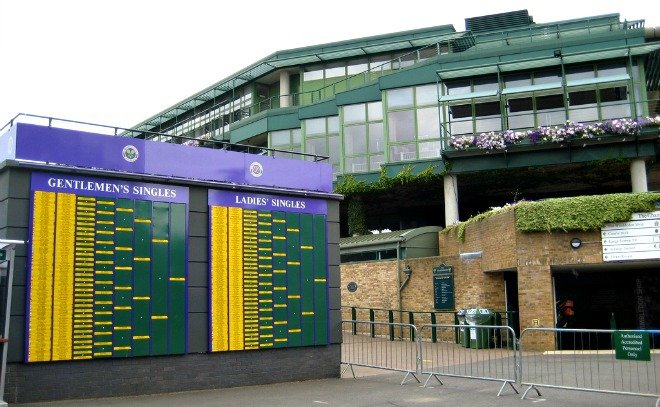 To say London gets Wimbledon fever would be an understatement. For the two weeks of the tournament, everyone in London has their eyes glued to the nearest screen. If you can’t make it onto the grounds, you can always view the tournament on an enormous outdoor screen on the roof of the One New Change shopping centre, New Street Square near Chancery Lane or Cardinal Place in Victoria.

Posted on Tuesday, June 2nd, 2015 at 10:17 am in London Events. You can follow any responses to this entry through the RSS 2.0 feed. You can leave a response, or trackback from your own site.

Summer in the City