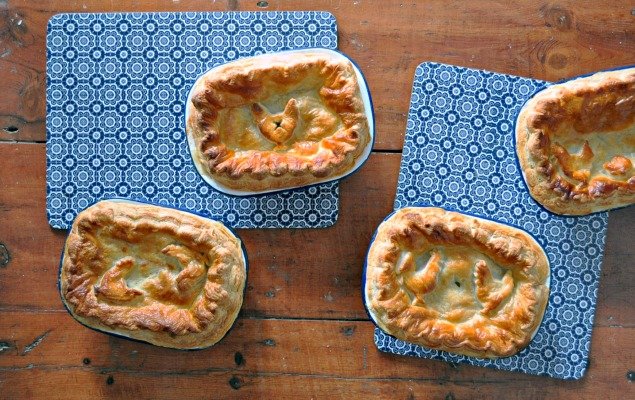 A chill in the air and some drizzle coming down in London today is the perfect excuse to roll out the heavy-weight champion of comfort foods – the chicken pot pie. Not that I really need the excuse of winter to make these since they’re a personal favourite recipe. I will just as happily be eating them in July with a lovely glass of chilled white. As it is, for a winter supper, there’s not much that can beat them. Some would advocate piling everything into the dish and popping it straight in the oven for ease, but it’s worth taking the time to brown everything first. Sautéing the leeks with thyme butter first removes that slightly cabbagey taste that you can get from stewed leeks. But the filling can easily be made in advance and kept in the fridge for a couple of days (in fact, would probably benefit from it).

With this in mind, these pies could easily be assembled as a quick after-work meal – although you may wish to forgo the decorative pastry chickens in a ravenously-hungry-post-work-supper situation! (You could also bung it all into one larger dish and only have to roll out one piece of pastry – another time saver, although you probably won’t need as much pastry as quoted below.) I have used ready-made pastry as … well … who has the time? But if you do find yourself seeking the most satisfyingly homespun of pies, take this to another level by making your own rough puff pastry. If you scoff at such chores, the ready-made stuff really is perfectly acceptable. (For those purists hoping for something approaching beatific, I’m just going to leave a little recipe at the bottom of the page for you.)

But whatever time you have to assemble, it’s worth hunting out the best quality, smokiest pancetta from your local butcher beforehand, rather than buying the watery bits from the supermarket, as it will make all the difference to the flavour. For anyone visiting London here’s a local tip: I get mine from Gastronomica in London’s famous Borough Market. For the perfect finish, serve the pies with wilted greens and smooth, buttery mash with a spoonful of grainy mustard stirred in. Enjoy! 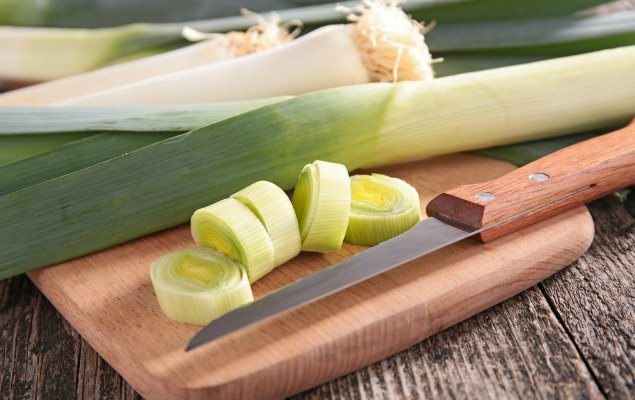 Put half of the flour on a plate and season well with salt and pepper. Toss the chicken pieces in the flour until well coated.

Heat the vegetable oil in a large sauté pan over a medium–high heat and fry the pancetta until golden. Remove from the pan with a slotted spoon leaving the fat in the pan. Add the chicken pieces to the pan and fry quickly until golden. Remove the chicken from the pan and add the butter and thyme to the pan. Add the sliced leeks to the melted butter and fry for a few minutes to absorb the butter, then add the wine and cook until most of the liquid has been cooked off. Stir in the remaining flour and cook for 2–3 minutes, then add the stock to the pan and cook for 2–3  minutes more to soften the leeks and thicken the sauce. Season well (without the meat in there as the chicken will still be a bit raw), then stir the chicken and pancetta back in (including any juices that may have gathered on the plate) and leave to cool.

Once the filling is cool, divide evenly between 4 pie dishes. (You could make the filling in advance as the flavour would benefit from being left to sit in the fridge for a day or so.)

Brush the lip of one of the dishes with a little beaten egg. Roll out a quarter of the pastry on a lightly floured surface – I go quite thin here so that the pastry is cooked through before the top starts to brown too much beyond a lovely golden colour. Cut 1cm/½in strips of pastry and place them around the moistened lip of a dish. Brush over the strips with a little beaten egg. Lay the pastry over the top and press down gently to seal around the lip of the dish, then trim off any excess pastry around the edge with a small, sharp knife.

Flute the edges of the pie by placing two fingers on the lip of the pastry and using your other hand to position the blunt side of a knife between your fingers. Simultaneously push gently outwards with both fingers, whilst gently pulling the knife inwards. Repeat around the whole pie to create a scalloped edge, then glaze the top of the pie with beaten egg. Be careful to keep the egg to the top of the pie and not let it run down the sides of the pastry, or it can stick the layers of pastry together and prevent them from rising properly. Use any trimmings to cut shapes to decorate the top of the pies and glaze the decorations, too, then cut a small cross in the middle of the pie to let the steam escape.

Repeat to add lids to the other 3 pies and chill in the refrigerator for 20 minutes while you preheat the oven to 220ºC/425ºF/Gas 7.

Place the pie dishes on a baking tray and bake in the preheated oven for 15 minutes, until golden brown. Turn the oven down to 180ºC/350ºF/Gas 4 and cook for a further 10 minutes, covering with foil or baking paper if the pastry begins to brown too much.

a pinch of salt

Sift the flour and salt into a large bowl. Cut the cold butter and lard into dice-sized cubes and add to the bowl with about 125ml/4fl oz/½ cup of the water. Mix with a round bladed knife, and then with your hand as it begins to come together, slowly adding the remaining 85ml/2¾fl oz/6 tablespoons water (you may not need it all), until you get a soft but not sticky dough. The butter and lard should remain in pieces at this point – it will get incorporated into the dough as you roll and fold.

Turn the dough out onto a lightly floured surface and roll out to make a rectangle about 5mm/¼inch thick, with the shortest edge closest to you. Mark the rectangle into thirds lightly. Fold up the bottom third of pastry to cover the middle third, then fold the top third down to cover that. Seal the edges gently with a rolling pin, and give the pastry a quarter turn so that the join is now on the right hand side.

Roll the pastry out to a rectangle again, and repeat the steps, folding the bottom and then top in, sealing the edges and turning clockwise. Repeat twice more to make four rolls and folds in total, then chill in the fridge until ready to use.

Posted on Friday, February 19th, 2016 at 5:00 pm in Food & Drink. You can follow any responses to this entry through the RSS 2.0 feed. You can leave a response, or trackback from your own site. 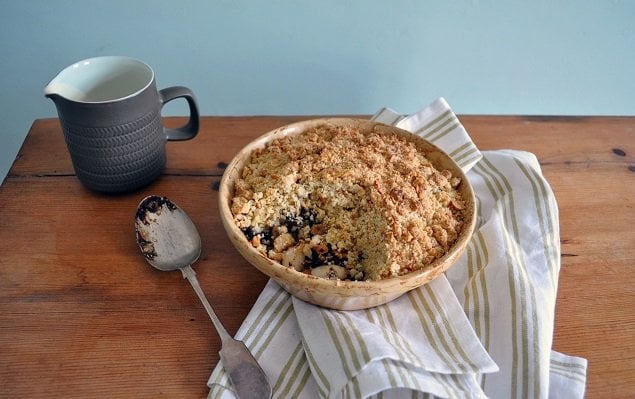 Recipe For The Classic Lancashire Hotpot