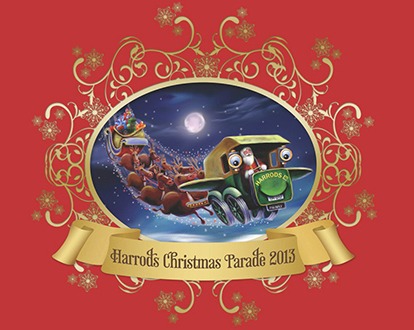 Father Christmas is on his way to Harrods in London!

It’s time to kick off the holiday season in London with the annual Harrods Christmas Parade! This fun and festive event is one of our favourite starts to the Christmas celebrations as Father Christmas arrives at Harrods Christmas Grotto in style. This year he will be accompanied by Nickelodeon friends, such as SpongeBob SquarePants and Dora the Explorer, along with the Teenage Mutant Ninja Turtles and British favs Wallace and Gromit. There will be plenty of music, dancing and even reindeer to add to the Christmas spirit.

Just take a look at the highlights from the Harrods Christmas Parade last year to see the fun!

Mark your calenders for Saturday, November 2nd, 2013 for the Harrods Christmas Parade! Fun for kids of all ages (and all of you kids at heart!), the parade makes its way down Brompton Road to the main entrance where Santa Claus takes his place once again as the center of the Harrods Christmas Grotto. Head over there early since the pre-parade fun begins around 8AM. Santa Clause arrives in time to celebrate a very special opening of Harrods at 9am. See you in Knightsbridge this weekend as we celebrate the start of the holiday season!

Harrods Christmas Parade
Saturday, 2nd November, 2013 (8AM – 9AM)
All the Details

Posted on Friday, November 1st, 2013 at 7:36 am in Shopping. You can follow any responses to this entry through the RSS 2.0 feed. You can leave a response, or trackback from your own site.