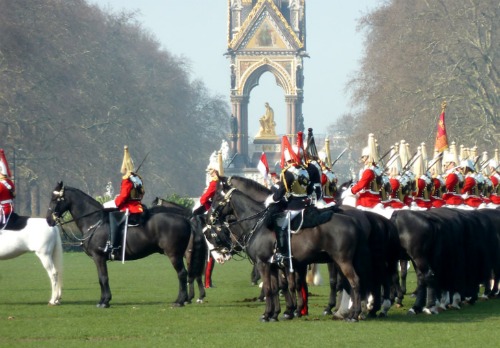 The Household Cavalry preparing for annual inspection near the Albert Memorial

If you’re in London this Thursday around 10am, you’re in for a royal treat! Plan your morning with a visit to Hyde Park along South Carriage Drive to watch the Major General’s Inspection of the Household Cavalry Mounted Regiment. Head to the Cavalry Review Ground just across Kensington Road in Knightsbridge where the Household Cavalry Barracks are located. That’s very near the Royal Albert Hall and the golden Albert Memorial in Kensington Gardens. 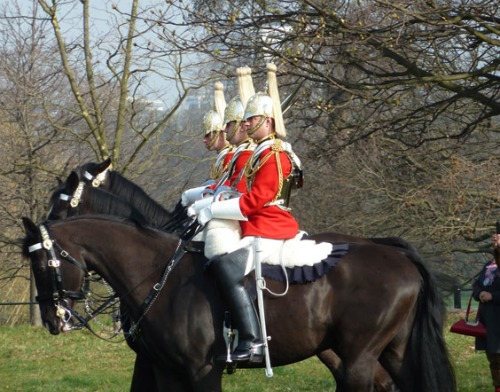 The brilliant red, white and gold uniforms of the Household Cavalry 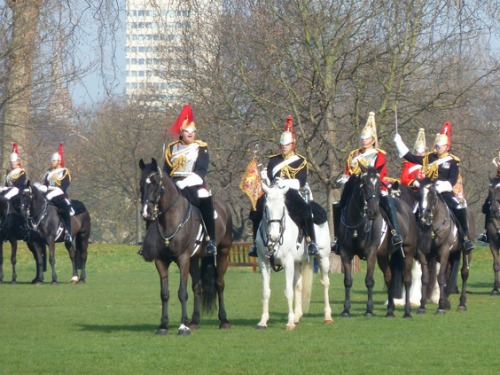 Calling out orders during the Household Cavalry practice in Hyde Park

Last Thursday I was lucky enough to be taking the Number 10 bus from Oxford street to Kensington. Just after rounding Hyde Park corner and starting along the park toward Kensington, I looked to my right saw hundreds of mounted British Cavalry in dress uniform. It was the Household Cavalry, the soldiers who protect the Queen! I ran to the front and begged the driver to let me off and he kindly assented. As I stood there, more Household Cavalry came galloping out of their barracks. 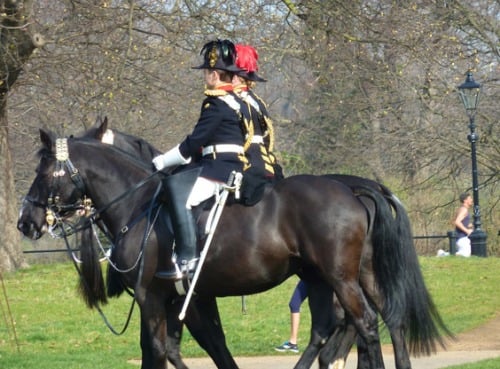 Joggers and people enjoying a lovely spring day in Hyde Park had a treat to see the Household Cavalry!

It was a spectacular show – pomp and circumstance and all that I love about England. I spoke to bystanders and learned that the Household Cavalry were out practicing for the Major General’s Inspection that takes place this Thursday, March 29th. The colors were gorgeous on a beautiful spring day in Hyde Park. There was a band playing and the colors of the red and white uniforms with the gold glimmering in the sunshine were striking against the backdrop of brilliant green and the blue sky.What a welcome to spring in London! The inspection includes a review of the Household Cavalry as they walk and trot in various forms past the Major General and his party on the Cavalry Review Ground. I spotted them preparing for these maneuvers along with the band and the beautiful drum horse. It was such a sight to see them out in full uniform—complete with swords—practicing for this important event! Watching as the Household Cavalry prepares to gallop - an amazing sight! Seeing such beautiful horsemanship is a wonderful experience in London! 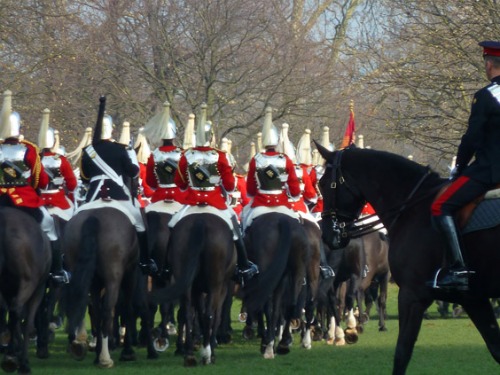 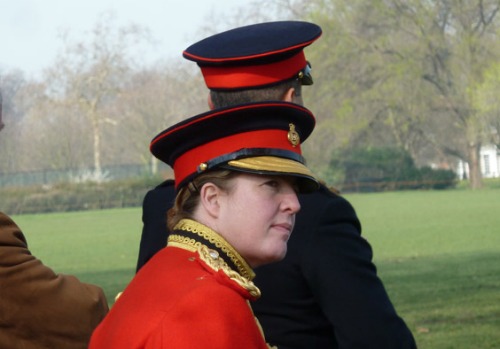 If you’re in London this week, you must go to see the Major General’s Inspection in Hyde Park on Thursday. During the Inspection, you’ll see carriages, mounted bands and the entire ceremony on view right in front of you. It’s one of the least publicized events of the year … and it’s free to enjoy!

Posted on Tuesday, March 27th, 2012 at 10:06 am in London Events. You can follow any responses to this entry through the RSS 2.0 feed. You can leave a response, or trackback from your own site.