Upon closer inspection, you see the petals, the black button centre, the green leaf and stalk. These are poppies. Millions upon millions of paper poppies that we wear in anticipation of November 11. 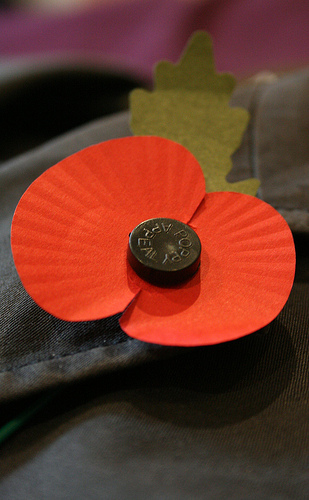 A poppy for Remembrance Day

In 1918 at the eleventh hour on the eleventh day of the eleventh month World War I came to an end with the calling of the Armistice. After four long, horrific years of war against Germany, peace returned to the pocked and blasted lands of Flanders.

Sadly, the Great War of 1914-18 was not the last of the twentieth century. Thus November 11 became an increasingly significant day to remember those military men and women, countless millions who made the greatest sacrifice for their country. At 11am on that day the whole nation – regardless of political inclination – falls silent for two minutes.  The first moment is when we remember those who have gone and during the second we ponder those who are left behind.

Two stanzas from Laurence Binyon’s (1869-1943) poem, For the Fallen, convey the most powerful evocation of this loss and the responsibility we who live must cherish.

They went with songs to the battle, they were young,
Straight of limb, true of eye, steady and aglow.
They were staunch to the end against odds uncounted;
They fell with their faces to the foe.

They shall grow not old, as we that are left grow old:
Age shall not weary them, nor the years condemn.
At the going down of the sun and in the morning
We will remember them. 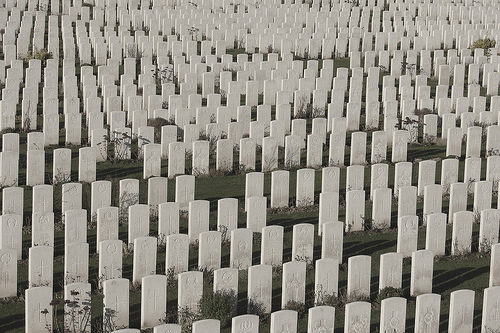 Remembrance Sunday, always the second Sunday of November, is arguably the official acknowledgement of the sacrifice the few made for the many. Services of Remembrance are celebrated in churches throughout the country, whilst in London the Cenotaph in Whitehall is the focus of proceedings. Surviving veterans, the Prime Minister, members of the Royal Family and the Queen all participate with Her Majesty traditionally laying a wreath at the foot of this symbolic, empty tomb. 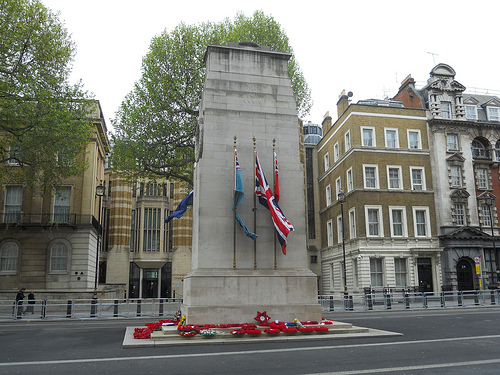 The Cenotaph in Whitehall, London

But what of the poppies? What is their significance? Today every penny gathered in from the annual Poppy Appeal goes toward the support of military veterans and their families, from the pensioners of World War 2 to the teenage squaddie who returned from Afghanistan last week.

As for the poppy’s origin, I can do no better than leave you with the poem in which this symbol first appeared.

In Flanders fields the poppies blow
Between the crosses, row on row,
That mark our place; and in the sky
The larks, still bravely singing, fly
Scarce heard amid the guns below.

We are the Dead. Short days ago
We lived, felt dawn, saw sunset glow,
Loved and were loved, and now we lie
In Flanders fields.

Take up our quarrel with the foe:
To you from failing hands we throw
The torch; be yours to hold it high.
If ye break faith with us who die
We shall not sleep, though poppies grow
In Flanders fields. 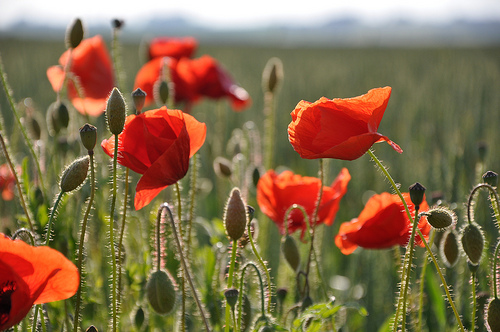 Zoë F. Willis is a London Perfect reservationist, writer and Londoner. Visit her blog Things Wot I Have Made to find out more about Zoë’s many creative talents!
Photo Credits: Poppy by Paul Simpson, War graves by Mark Wainwright, Cenotaph by Gene Hunt, Poppies by Charlotta Wasteson

Posted on Sunday, November 11th, 2012 at 8:39 am in London Events. You can follow any responses to this entry through the RSS 2.0 feed. You can leave a response, or trackback from your own site. 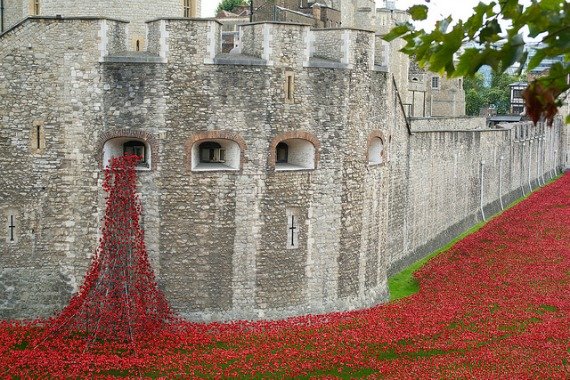 A Dramatic Field of Poppies at the Tower of London 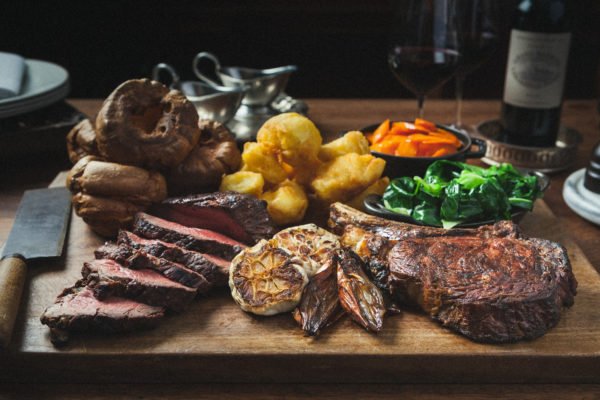