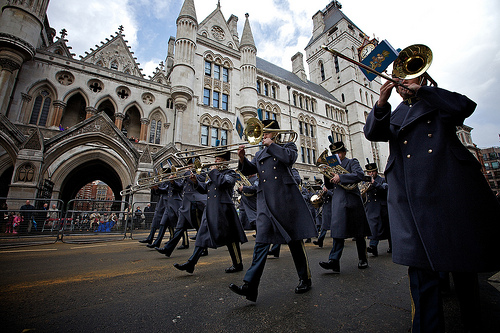 Marching bands, festivities and fun at the Lord Mayor’s Show in London

It’s the eve of the Lord Mayor’s Show in London. What’s that? The oldest, longest, most popular civic procession in the world. Come again? That’s right, the Lord Mayor’s Show is a procession that has taken place for nearly 800 years through all the ups and downs and twists and turns of London’s history. Why not prepare a nice cup of tea to enjoy as we share with you the fascinating and entertaining history of the Lord Mayor’s Show? First up, it’s time to  introduce you to The Right Honourable the Lord Mayor of London. This is the official title for the Mayor of the City of London, who is elected each year in September and takes office on the Friday before the second Saturday in November at “The Silent Ceremony.” (Before you start flipping through your calendars, that’s today, November 9th, 2012.) The ceremony is called silent supposedly because no speeches are made, except for a short statement by incoming Lord Mayor.

And just who is the lucky fellow this year? The 685th Lord Mayor of London is Alderman Roger Gifford. After taking office, the Lord Mayor resides in Mansion House, and it is from there that the Lord Mayor’s Show procession begins. This year the event takes place on the morning of November 10th, 2012. The Lord Mayor rides in the ornate (and that’s putting it mildly) State Coach, which travels through the City of London to the Royal Courts of Justice in Westminster where the new Lord Mayor will swear allegiance to the the Crown in the presence of the judges of the High Court. Why the big procession and the declaration of loyalty to the Sovereign? 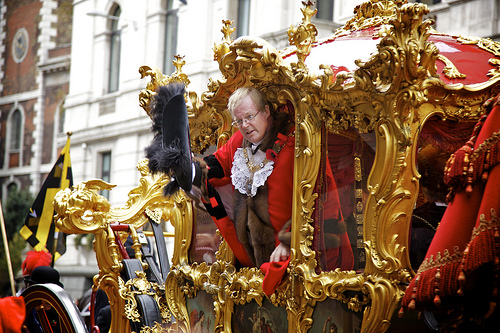 So now that you know how to spot the crest for the City of London and those cool dragons that protect the entrance to the City of London, you’re ready for the Lord Mayor’s Show. With nearly 800 years of practice, it’s no wonder that this is one of the grandest and best-loved pageants of the year in London. According to the Lord Mayor’s Show website, this year’s procession will not fail to impress, with (and we quote): “Over 6500 people, 22 marching bands, 125 horses, 18 vintage cars, 21 carriages, an original American stagecoach, a Japanese Taiko drum band, a steamroller, a boat, a Sherman tank, an F-type Jaguar and some birds we shouldn’t mention.” Sure there will be fancy uniforms, the glitzy State Coach and plenty of bearskin hats, but lest you think this was all starting to sound a bit too serious, the American stagecoach, steamroller and unmentionable birds should clue you in to just how much fun there is to be had at the Lord Mayor’s Show! 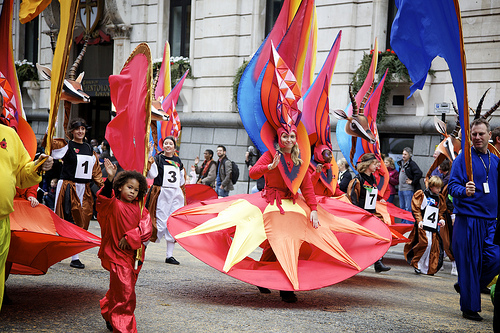 The Lord Mayor’s Show procession is over three and a half miles long and fills the whole stretch between Mansion House near the Bank of England all the way to the Royal Courts of Justice near Aldwych. The procession begins at 11am sharp with a flypast by the RAF. It travels past St. Paul’s Cathedral in the morning and returns via the embankment between 1pm and 2:30pm. You can find out the timetable and map for this year’s Lord Mayor’s Show here.

Posted on Friday, November 9th, 2012 at 6:30 pm in London Events. You can follow any responses to this entry through the RSS 2.0 feed. You can leave a response, or trackback from your own site.

Our Top Picks for London this November

Christmas at Fortnum & Mason in London