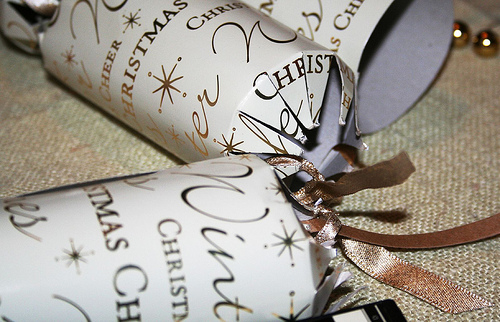 It’s been an exciting day so far. Well, it is Christmas Day after all. Small children and large adults have gleefully emptied stockings of various small gifts (usually at some ludicrously early hour). The family have trundled along to Church, sung a few carols and celebrated the birth of the Messiah. Presents may even already have been divested of sparkly paper. The living room now looks like a bomb went off in a Vegas show girl’s costume cupboard.

It’s probably about time for Christmas lunch. But what’s this? Alongside the plates, cutlery and turkey-associated gastronomic delights of this festive day you spot one more present … 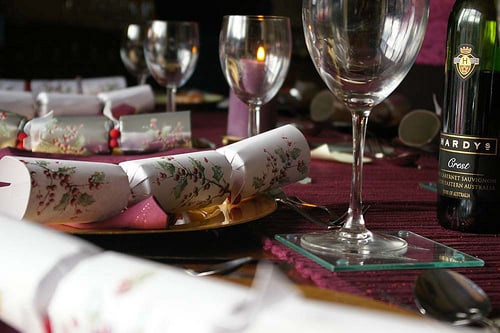 Another present awaits on the Christmas table …

Dear London Perfect readers, let me introduce you to a Christmas Cracker. These beauties were invented about 150 years ago by a certain Tom Smith and have since become a mainstay of British Christmas tradition.

Now please note, although crackers have their origins in the charmingly wrapped and delicious bonbons of French 19th-century tradition—which probably explains why our Antipodean cousins today still call crackers bon bons—they are not edible. The best you could get out of munching on these sorts of crackers in a good deal of extra roughage. 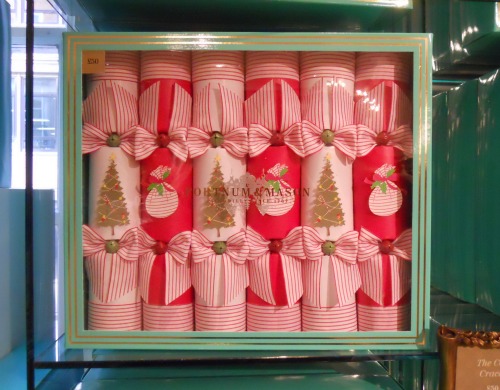 Christmas Crackers from Fortnum & Mason … not for munching on!

The reason being that a cracker’s main component appears to be a toilet roll tube. This is filled with a small toy, a silly joke, a paper crown and a slip of gunpowder-impregnated card, all wrapped in colorful paper. Alright I might be exaggerating about the gunpowder element. But whatever exciting chemical combination cracker makers treat that bit of card with, it’s important. For when the ends of the cracker are pulled by two Christmas day attendees (familial connections are not important but a shared sense of silliness is VITAL) that card causes the most thrilling of sounds…

Cue shrieks of delights. The contents of the cracker are released. The uselessness of the small toys are compared and in our household comedy plastic moustaches always trump the ubiquitous fortune telling fish. 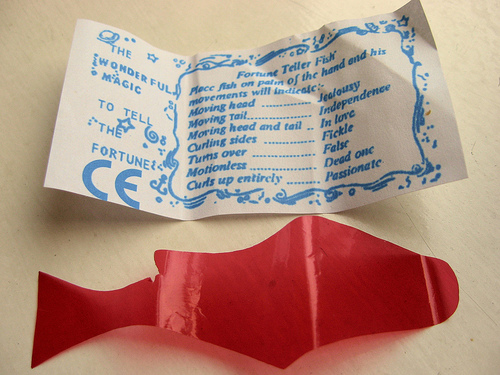 A fortune telling fish from a Christmas Cracker

After this revelers then read out gems of the comedy world such as these:

What did the fish say when it swam into a wall?
Dam.

What do you call a penguin in the Sahara desert?
Lost.

But the highlight of the whole affair will be ensuring that the most serious person in attendance wears a paper crown. For the rest of Christmas day. 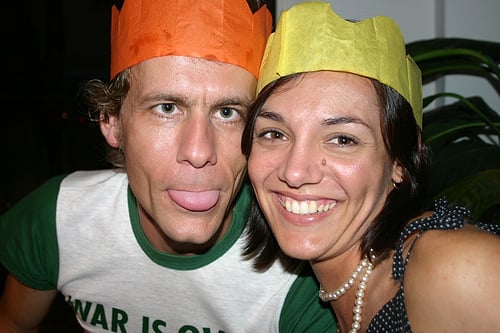 A bit of silliness on Christmas day!

It’s best not to question why this whole malarkey happens. It just does. It’s probably some sort of psychological release from the ongoing “stiff upper lip” status that is the British default position.

On a serious note, I have in recent years noticed a few aberrations on the cracker theme. Crackers that smack of hubris. Like these from Selfridges. Sure, they look lovely. But useful gifts such as a money clip or key ring should be strictly verboten. And where’s the silly joke and paper crown?

Nope. Such crackers are not for the purists.

But if you want to take the spirit of the Christmas Cracker and merge it with the streak or surreal bonkersness that often typifies the inhabitants of these Fair Isles, you can look no further than the world’s biggest Christmas Cracker. It’s such feats of weird ambition—usually followed by a well-deserved trip to the pub—that are truly worthy of praise, comment and unadulterated admiration.

Posted on Monday, December 17th, 2012 at 11:08 am in London Living. You can follow any responses to this entry through the RSS 2.0 feed. You can leave a response, or trackback from your own site.

One Response to “Christmas Crackers – A British Holiday Tradition”