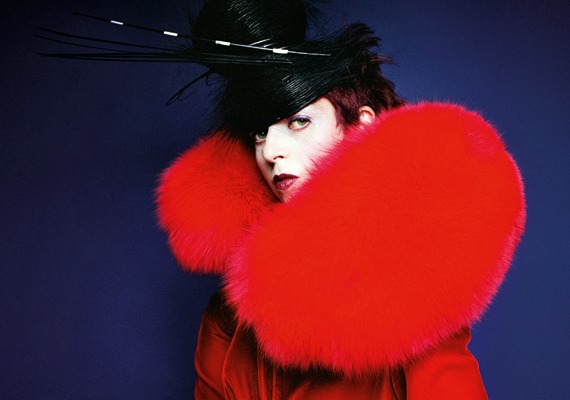 There is something unique about the way we English dress ourselves. Perhaps it’s our unpredictable weather. One minute the skies are filled with glorious rays of sunshine, and out come the shorts! But wait, what’s this now? Grey skies? Is that a raincloud? It jolly well is! Well, let’s sling a Barbour jacket on, too. And a pair of wellies, as a “just in case.” Do I look silly? Maybe if I wear sunhat, it will distract from this bizarre combo. That’s better!

So, as you can imagine, the Isabella Blow: Fashion Galore! exhibition, currently on display at at Somerset House in London, showcasing the wardrobe of a true English fashion icon has caused waves of excitement amongst the fashion and art world alike here on this windy isle.

Fashion journalist Hamish Bowles once described Isabella Blow as ‘truffling for talent’ and he’s pretty spot on. Known first and foremost as an impulsive, extravagant and always breathtakingly imaginative fashion director for Tatler and The Sunday Times, Isabella was always a visible force when championing British designers. Alexander McQueen and Philip Treacy were patronized and nurtured by Blow from young fashion students to respected fixtures in international fashion design. 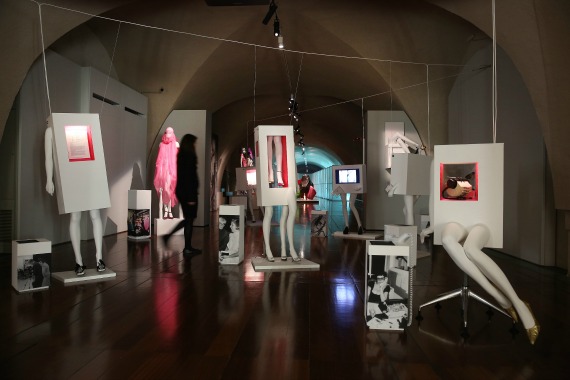 Small and intimate and with a suspicion of the gothic, the first room we come to in this fabulous exhibition shows us a glimpse into the rarified world of English aristocracy. Isabella’s childhood. It’s a rags to riches and back to rags again scandalous gambol through crumbling Manor houses and barmy colonial Uncles. A highlight (and actually very moving) feature is film footage of Isabella herself talking us through the family photo album. It all ends in tragedy, of course. But we won’t dwell, as this is a celebration of a wonderful woman and her equally glorious wardrobe.

Then, to the clothes. Oh my, the extraordinary clothes! 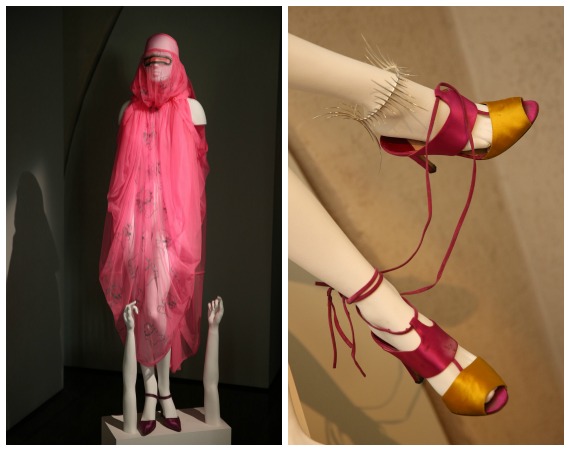 Isabella’s estate sent her entire wardrobe to auction at Christies and it was luckily snapped up in its entirety by Isabella’s good friend and fellow aristo/fashion lover Daphne Guinness. This exhibition shows us key pieces from critically acclaimed collections. 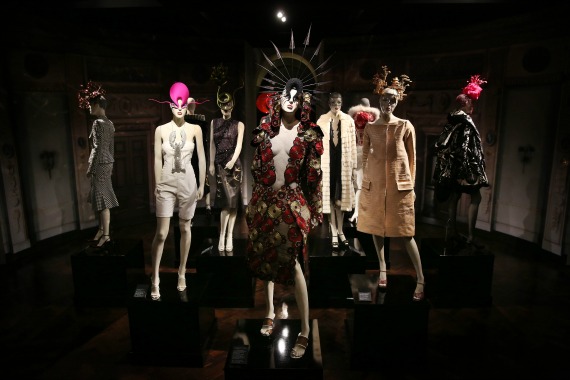 It starts with McQueen’s flamboyant student pieces that already show his gothic imaginings, with a devilish hint of the macabre. Isabella bought his entire Final Show collection for herself, and here it is. It’s breathtaking! Oh Alexander, how we love you, let us count the ways! 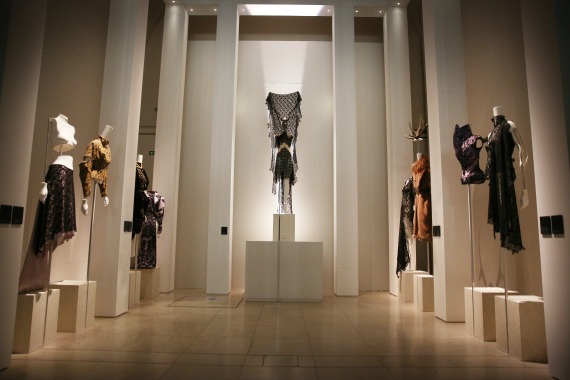 Pressing on, we swoon over the reams of black lace, the tiny (she was ever so small) exquisite corsets, the silks and satins in bijou shades. Each mannequin is resplendent in a full outfit as put together and worn by Isabella, from shoes to spectacular Treacy hats. It becomes clear that it wasn’t just the way she supported these theatrical designers, it seemed second nature to Isabella to put together pieces in such a way as to create a story. It’s sheer fantasy! 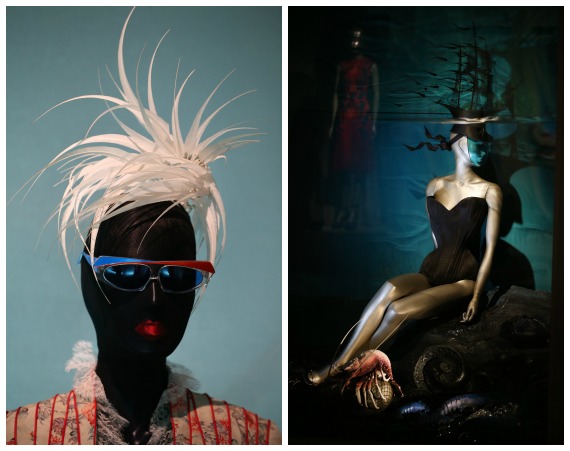 Mermaids, warrior women, Medieval queens (we must remember this is the lady who got married wearing Joan of Arc-esque chainmail and helmet combo) are all invoked in her styling of these fabulous clothes. There’s a ‘castle’ hat by Treacy with a drawbridge, woodland and approaching knights. A hat!

I mean, look at this Swarovski lobster ‘necklace’. It’s a sure statement of individuality! 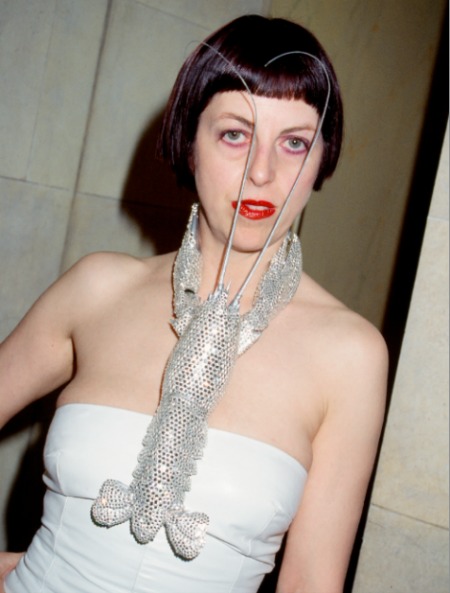 Isabella Blow at the American Embassy in Paris 1998 © Roxanne Lowit

The breathtaking heart of the exhibition is McQueen’s tribute to Isabella. Firm friends for years, she died three years before him, and in a fitting tribute he created a feathered, floor length gown replete with towering headpiece. It’s dramatic, gothic and had she been around to see it she would have adored it.

The clothes on show here really are art. Colourful and rich in narrative, these outfits are how the world remembers a woman who despite the struggles she encountered in her life had a huge influence in the way the world viewed the British fashion industry. We left feeling inspired, awestruck and kind of regretting that we never met her. She seemed like a fun woman!

Now, I must dust off my ostrich feather coat, it’ll look fab with my wellington boots…

Posted on Monday, February 17th, 2014 at 5:19 pm in London Events. You can follow any responses to this entry through the RSS 2.0 feed. You can leave a response, or trackback from your own site.