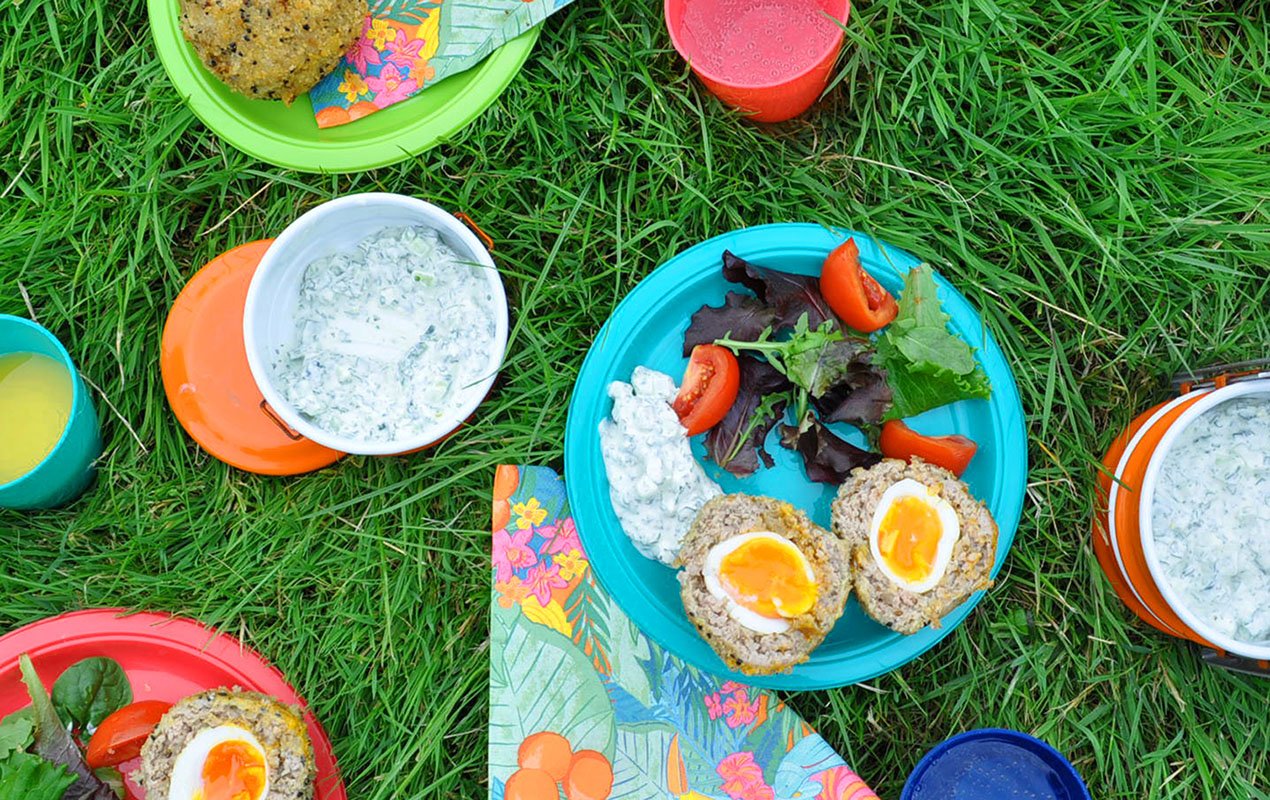 We Brits have a deep love of Indian food, so I have given the Scotch Egg – that classic picnic snack – a bit of a makeover with the addition of some spice. If you haven’t tried ajowan in cooking, it’s definitely a spice worth taking the effort to find. Most supermarkets don’t have it in their selection, but it’s easy to buy online, or in specialist spice shops. As well as ajowan and store cupboard staples, ground cumin and coriander, a few nigella seeds mixed into the breadcrumbs add another flavor boost and give these eggs a wonderfully speckled crust.

For me, a good Scotch egg needs to have a runny middle, and so their first boiling is a short one. If you prefer to avoid raw yolks, just increase the cooking time to about 8 minutes and they should be well cooked through by the time you are finished frying. Either way, try to use really good golden yolked eggs – Burford Browns are my favorites.

I serve my Scotch eggs with a lovely herby cucumber and lemon raita, which gives a little freshness, and helps cut through the richness of the runny yolk and fried meat. 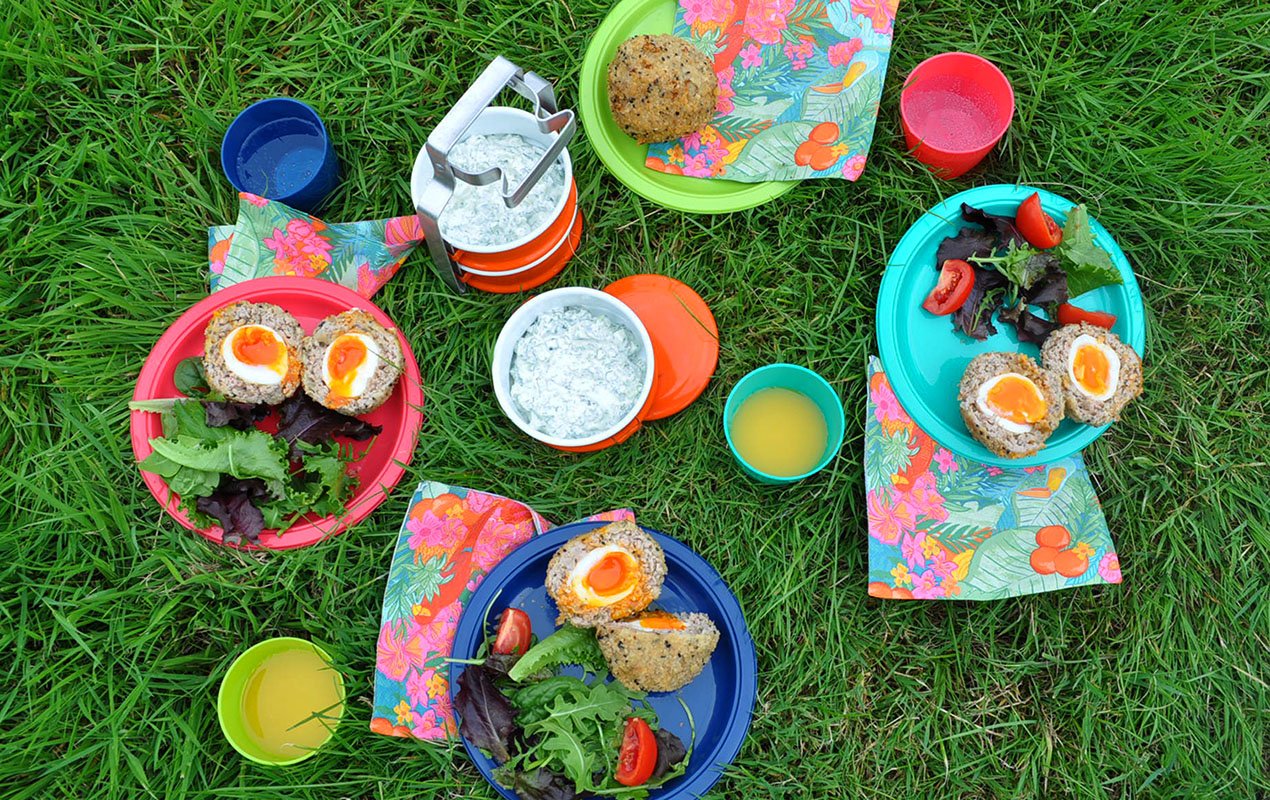 sunflower or vegetable oil, for frying

a large handful of mint leaves

a small handful of coriander/cilantro leaves

a 7.5-cm/3-inch piece of cucumber, chopped into small dice

a squeeze of lemon juice

Heat the oil in a frying pan and add the onion. Cook over a low–medium heat for about 10 minutes, stirring occasionally, until the onions are cooked and beginning to color.

Meanwhile, crush all the spice seeds in a pestle and mortar. Add the spices to the softened onions, along with the garlic and cook for a further 3 minutes to toast the spices. Season with 1 teaspoon of salt flakes and a really good grinding of black pepper, remove from the heat and leave to cool.

Bring a large pan of water to the boil and add 6 of the eggs (the nice golden-yolked ones, if you have them). Boil for 4 minutes exactly (longer if you don’t want the yolks runny) then remove them with a slotted spoon and put straight into a bowl of cold water to cool completely – at least 10 minutes in the cold water. Once cool, peel them very carefully.

Put the pork in a large bowl and add the cooked onions and spices. Beat one of the remaining eggs and add it to the pork, and mix well until everything is completely combined. Divide the mixture into 6 equal balls.

Take a ball of the pork mixture and press it out over the palm of your hand to form a thin patty in your palm – make it as big as you can as it needs to be large enough to surround the entire egg. With your other hand, take an egg and coat it in flour, then place it onto the pork and pull the pork around it. Use both hands to even out the layer of meat, smoothing it over and making sure the egg is totally surrounded. Set aside while you cover the other eggs in the same way. 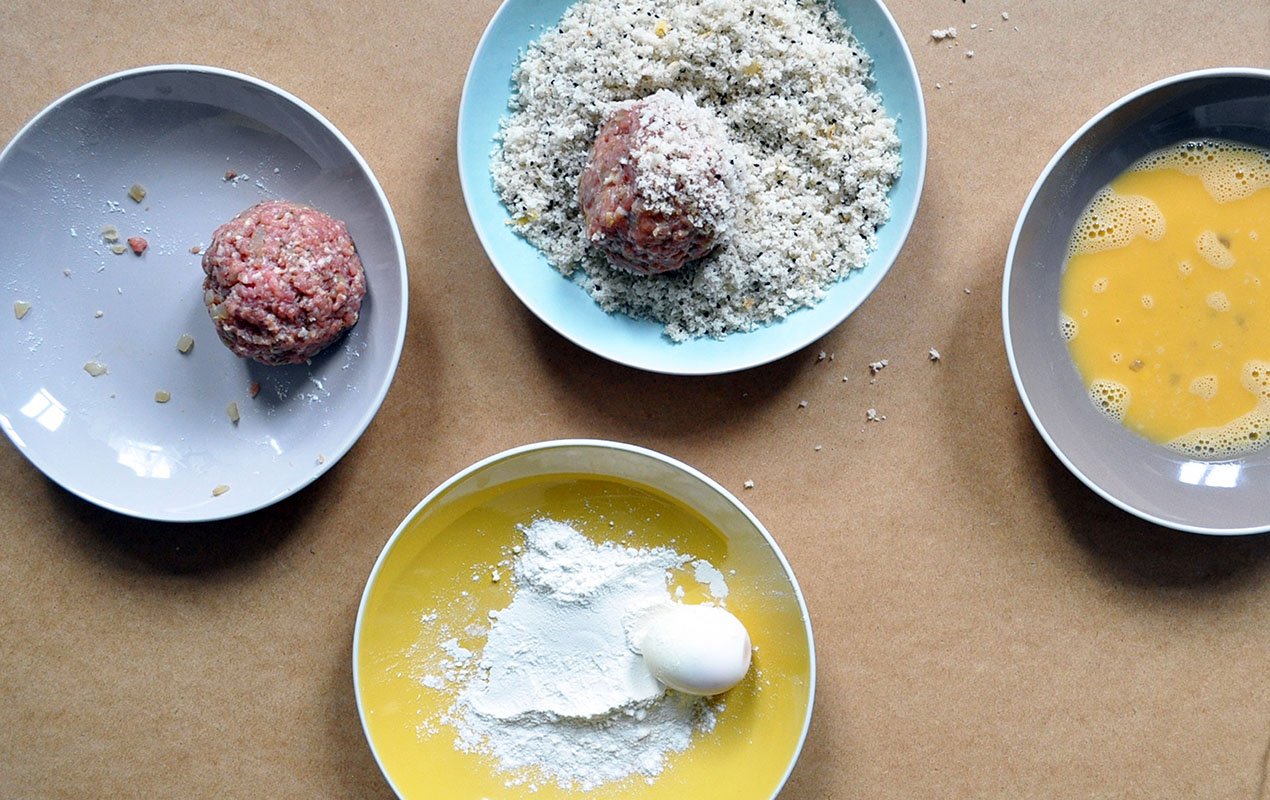 Heat a pan of the sunflower or vegetable oil to 170ºC/340ºF. One by one, dip the eggs first in the flour, then in the egg, and finally in the breadcrumbs. Roll them around in each coating so that they are evenly covered before you move on to the next. Lower the eggs into the hot oil with a slotted spoon and fry them for about 7 minutes until crisp and golden on the outside. You may have to do this in batches as they are quite big once coated and you don’t want to overcrowd the pan or they won’t brown evenly. Once golden, remove the eggs from the oil with a slotted spoon and transfer to a plate lined with paper towels to drain. Leave the eggs to cool completely before packing them into your picnic box, or the steam will make them go soggy.

While the eggs are cooling, whip up the raita. Simply chop all the herbs finely and mix them with the yogurt and diced cucumber. Add the grated lemon zest and a squeeze of lemon juice to loosen the mixture. Season well with salt and pepper and pack into a seal-able pot to take with you on your picnic.

Posted on Tuesday, August 16th, 2016 at 4:45 pm in Food & Drink. You can follow any responses to this entry through the RSS 2.0 feed. You can leave a response, or trackback from your own site.

Recipe For Baked Mackerel With Fennel, Apple And Cucumber Salad