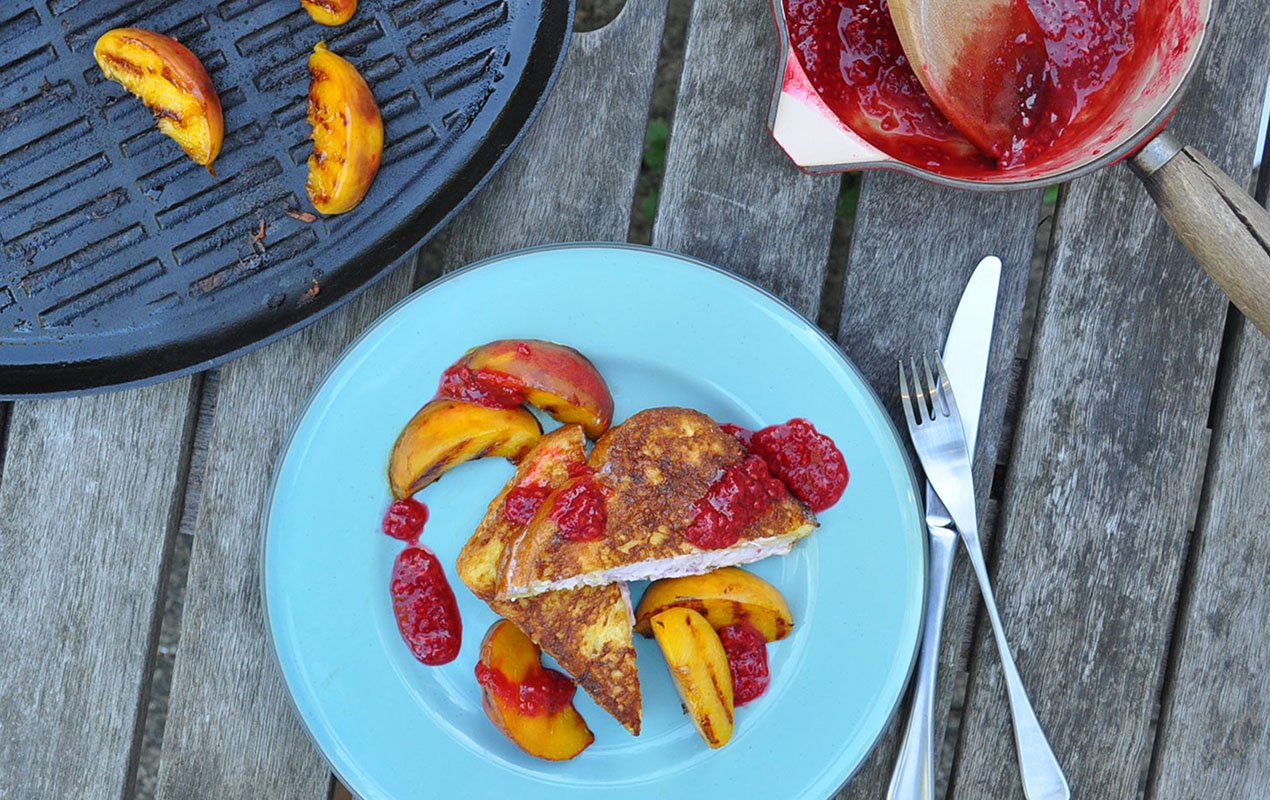 This delicious recipe for Ricotta-filled French toast with griddled peaches was initially conceived as a dessert. I have to admit, it was an excuse, really, to buy a bottle of St Germain elderflower liqueur as someone had told me it was national peach month (and August is, apparently), and I thought the two flavors would go very well together. I discovered the flavor combination did indeed work very well, but it really felt more like a brunch dish, so I switched the liqueur for elderflower cordial instead.

This recipe is an ode, really, to an amazing breakfast I had at the Trident bookstore café in Boston, where they served lemon ricotta-stuffed French toast with blueberry syrup. This one is a British take, with elderflower and raspberry syrup drizzled over, and more raspberries whipped into the ricotta filling. Griddling the peaches slightly caramelizes them, making them sweet and juicy.

One quick tip before you begin: don’t slice the brioche as thick as you usually might for French toast. As each slice is only being cooked on one side, you want it to be able to cook all the way through before the outside burns, so keep it 1cm/1/3in thick at the maximum, and don’t have the heat too high, either. 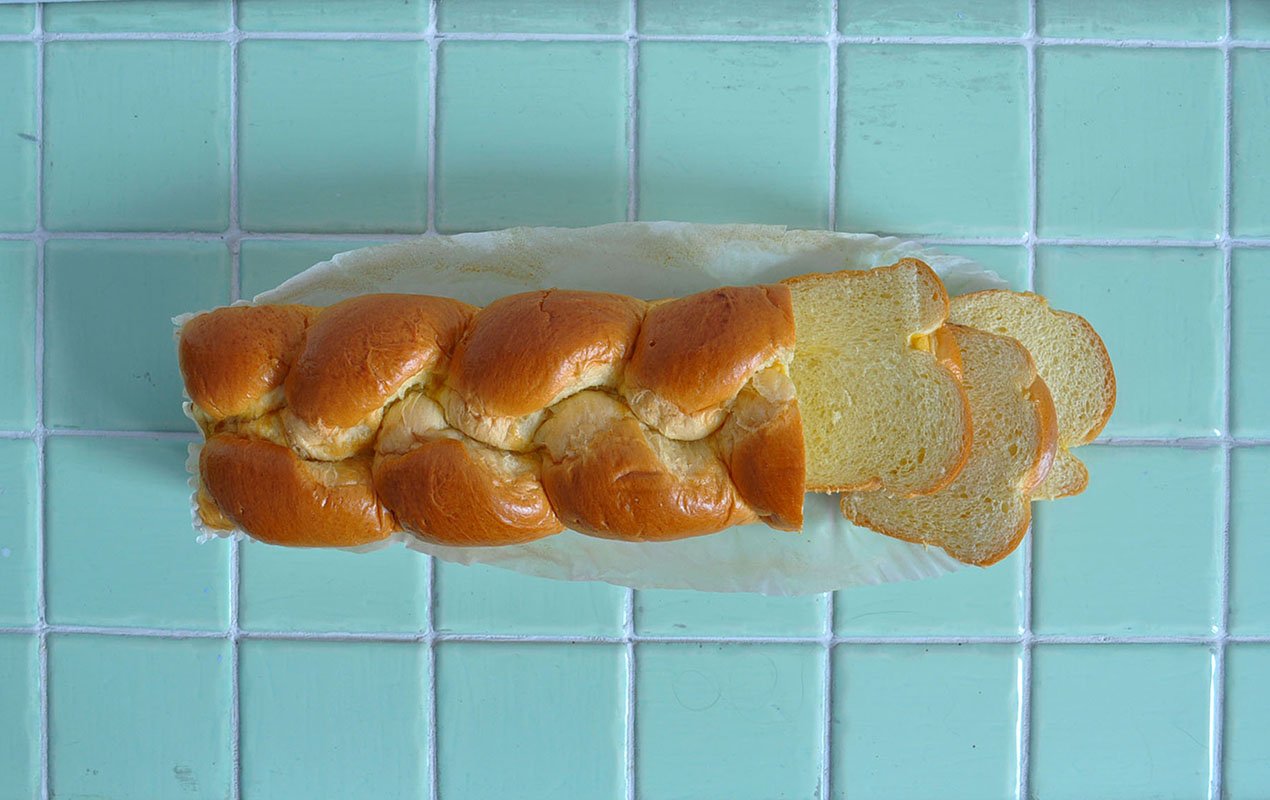 Chop the peaches into 8 wedges and put them in a shallow dish. Pour over the elderflower cordial and leave to marinate for 30 minutes or so. (You could do this the night before and leave in the fridge overnight, if that’s easier).

Meanwhile, put the ricotta in a bowl and whisk for a few seconds with an electric whisk until smooth and lump-free. Add one-quarter of the raspberries and the icing/confectioners’ sugar and whisk again until the raspberries are broken up and roughly incorporated, leaving flecks of red throughout the mixture. Put in the fridge while you prepare the other ingredients.

Preheat the griddle pan over a medium heat and brush it with a light layer of oil. Fish the peaches out of the cordial and place them on the griddle pan. Cook for a few minutes on each side, until brown lines appear across them. Then remove them from the heat and set to one side. 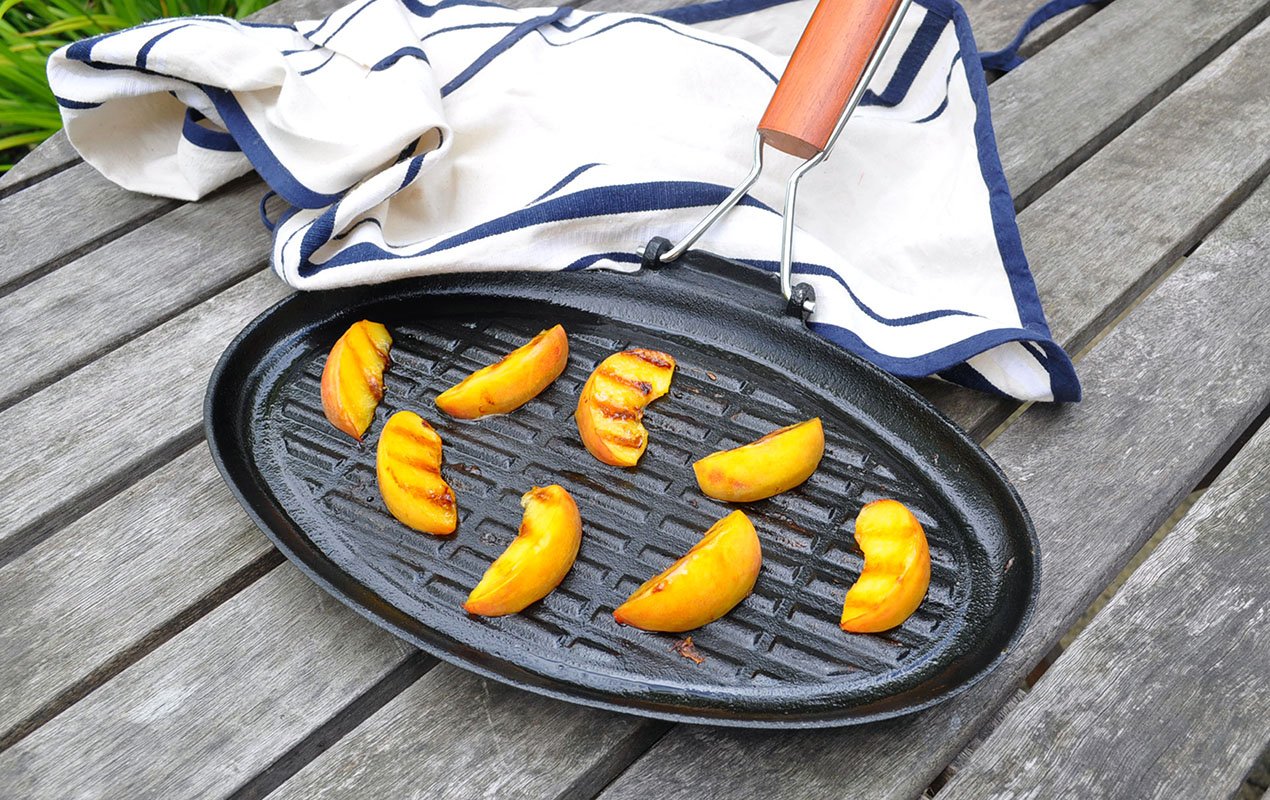 Meanwhile, add the cordial that the peaches have been marinating in to a small saucepan with the remaining raspberries. Cook over a medium heat until the raspberries are cooked to a syrupy compote.

While the compote is reducing, whisk together the eggs and milk and put them in a shallow dish (I use a large rectangular baking dish). Lay the slices of brioche in the dish and leave for a couple of minutes to soak up the liquid. Without turning the slices over, divide the ricotta between two of the bread slices, spreading it over the surface. Flip the two uncovered slices of bread over to seal in the filling, so that you have 2 sandwiches, with the egg-soaked side of the bread on the outside on the top and bottom.

Melt 1 tablespoon of the butter in a non-stick frying pan and lay one of the sandwiches in the pan. (You could get them both going at once if you have two suitable pans and don’t mind the extra washing up.) Cook for 3–4 minutes on each side, until the bread is golden brown. Carefully flip the sandwich over with a large spatula or fish slice and cook until golden on the other side, too. Remove the toast to a plate, add the other 1 tablespoon of butter to the pan, and cook the other sandwich in the same way.

Slice the sandwiches in half diagonally and transfer to serving plates. Top each plate with half of the griddled peaches and spoon over some of the elderflower and raspberry syrup. Serve any remaining syrup on the side.

Posted on Wednesday, August 31st, 2016 at 1:11 pm in Food & Drink. You can follow any responses to this entry through the RSS 2.0 feed. You can leave a response, or trackback from your own site.

Recipe For The Classic Lancashire Hotpot