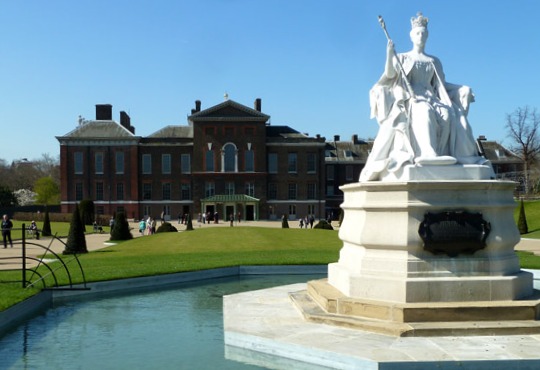 Kensington Palace was the home of Queen Victoria and Princess Diana

We’ve been eagerly awaiting the reopening of Kensington Palace to get a first glimpse of its transformation after a $19 million dollar renovation. After two years of work, Kensington Palace reopened to the public on March 26th, in time for Queen Elizabeth’s Diamond Jubilee celebrations in June and the Olympics in London this summer. I couldn’t wait any longer and had to visit on opening day. The visitor experience has been transformed with new exhibits, beautifully landscaped gardens and cafés. Now it truly is an Enchanted Palace!

Visitors will find the newly landscaped entrance to Kensington Palace from Kensington Gardens near the Round Pond. The Palace was built in 1605 as a private country house in the Jacobean style, and was purchased by King William III and Queen Mary II in 1689 as a place where they could escape the hubbub of Whitehall. They hired Sir Christopher Wren to make it fit for a royal residence, and over the centuries many important architects continued to make improvements, including William Kent and Nicholas Hawksmoor. The newest renovations have retained the historic charm of the Palace while telling the story of its royal residents in imaginative and innovative ways. History comes to life like a fairytale—magical, playful and completely captivating. 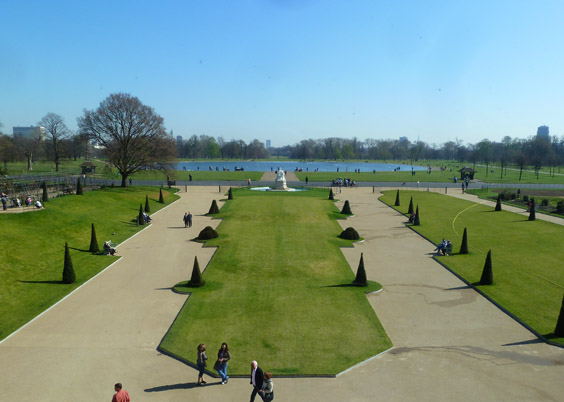 View overlooking Kensington Gardens and the landscaped entrance to the Palace

The exhibitions and State Apartments have been redone beautifully, and visitors now have four themed areas to explore. Even if you’ve been to Kensington Palace in the past, you’ll want to visit again to experience the newly reimagined, whimsical and fun exhibits. The Palace’s history has been divided into four areas, the exhibit Victoria Revealed tracing the story of Queen Victoria’s life through her own words, fascinating tales and history told in new designs in the King’s State Apartments and Queen’s State Apartments, and a special exhibit dedicated to Princess Diana.

Here’s a look inside the new Kensington Palace from my visit on opening day. You’ll want to add a visit to Kensington Palace at the top of your to do list during your holiday in London. And great news – it’s walking distance from many of our London Perfect vacation rentals! 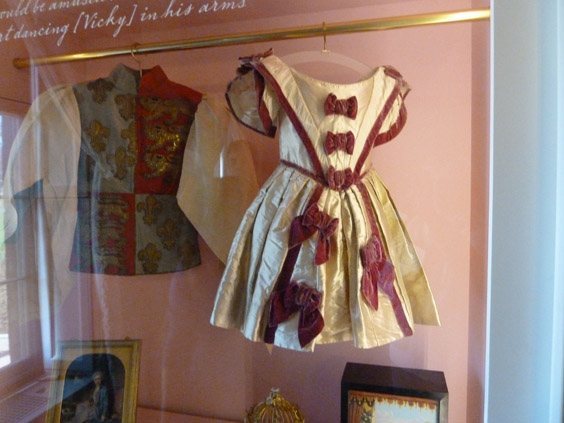 A royal childhood – Queen Victoria’s dresses from when she was a little girl!

Kensington Palace’s most famous monarch was Queen Victoria, whose rein saw England become the most powerful nation in the world.  She was born and grew up in Kensington Palace, and the in new exhibit Victoria Revealed you almost hear the laughter of royal children running through the halls. The exhibition explores much about Victoria’s life, from pretty clothing she wore as a child and her toys and dolls, to the important gown she wore to her first Privy Council meeting to her wedding dress, and finally her mourning attire when her beloved husband Prince Albert died. There’s even an early film of Queen Victoria at her Diamond Jubilee. 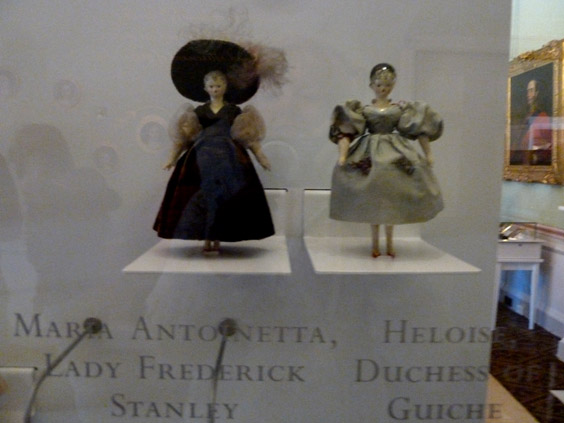 Throughout the exhibit, quotations from Victoria tell the the story of her childhood in her own words. This creates a wonderfully personal setting that brings the displays to life. On the glass case near her dollhouse her words tell a different story of Victoria’s childhood than many visitors might expect: “I was brought up very simply – never had a room to myself till I was nearly grown up – always slept in my Mother’s room till I came to the Throne.” 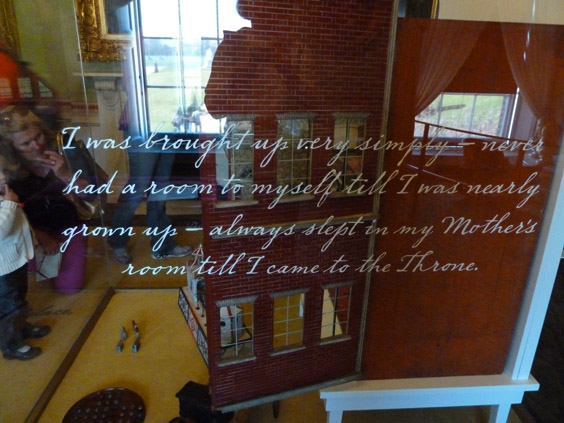 The story of her courtship and marriage to Prince Albert are touchingly told through her own words inscribed on the glass cases. She was so in love with Albert, and the exhibit tells this story in a beautiful way. She was impressed by Albert the first time she saw him, “I didn’t think of marrying for three or four years but seeing Albert has changed this.” Looking at Queen Victoria’s wedding dress and a portrait from her wedding day took on new meaning reading her own words, “It was the happiest day of my life!” 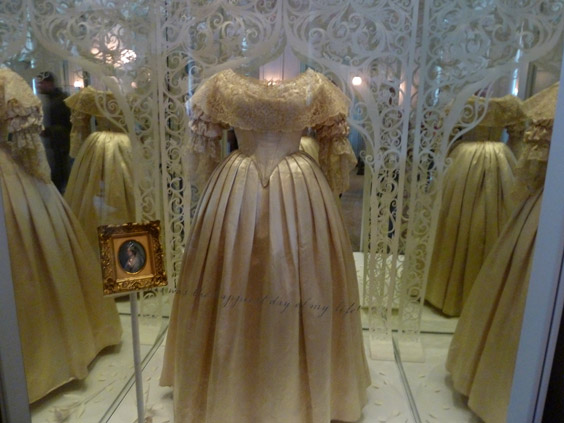 Queen Victoria’s beautiful wedding dress – look how tiny she was! 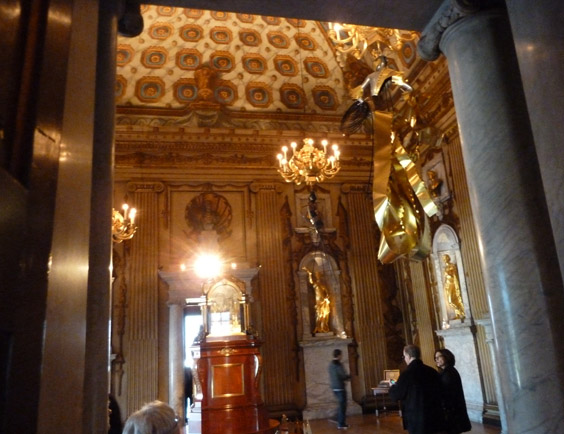 Walking into the grand King’s Royal Apartments in Kensington Palace

Magnificent is the only way to describe the King’s State Apartments. One can feel England’s history while walking from room to room. The glimmering architectural details, the portraits, the clothing and displays tell the story of Kensington Palace’s many royal residents. 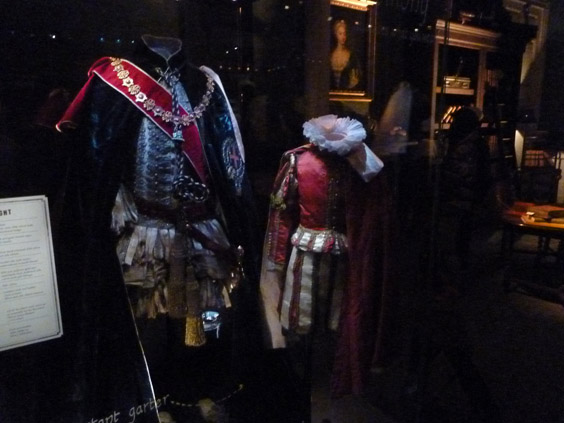 A display in the King’s State Apartments in Kensington Palace

The stairs to the King’s Chambers were stunning with Italian frescos of a balcony scene on the way up.  And small figures in the lamps along the way depicted the royal household in a charming way. 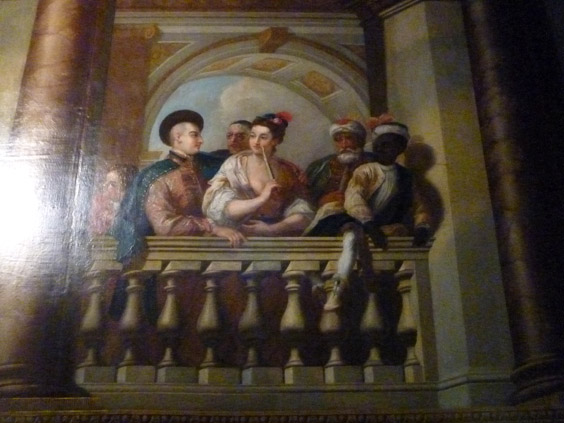 The Queen’s State Apartments have been beautifully redone, where you can visit the Queen’s Gallery and Drawing room where Mary Stuart, later Mary II, and her sister Anne once entertained in a grand setting, as well as the Queen’s closet and bedroom. Each room is filled with history, and the stories are told in vibrant new ways after the remodeling. 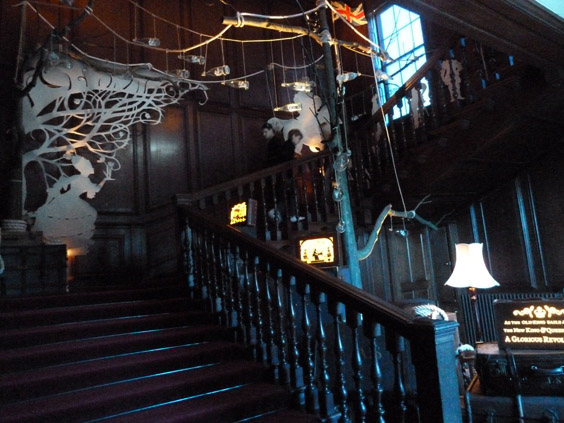 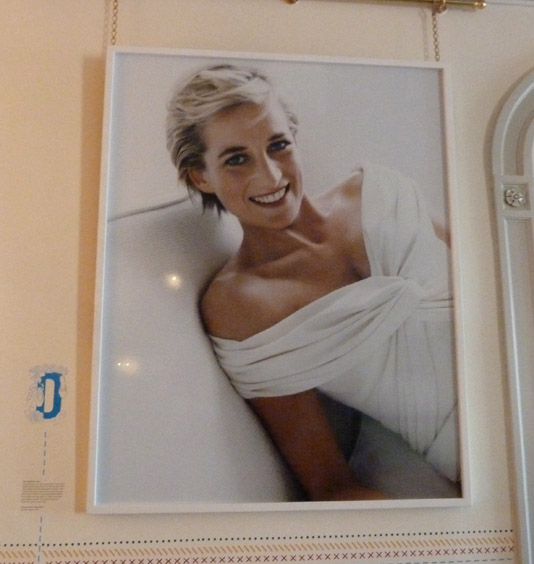 Kensington Palace will be forever closely tied to memories of Princess Diana, and the Palace’s most famous recent figure is honored with a small exhibition dedicated to her. The display includes some of her most famous dresses, including the black strapless dress designed by Elizabeth and David Emanuel that Diana wore to her first royal function in 1981. 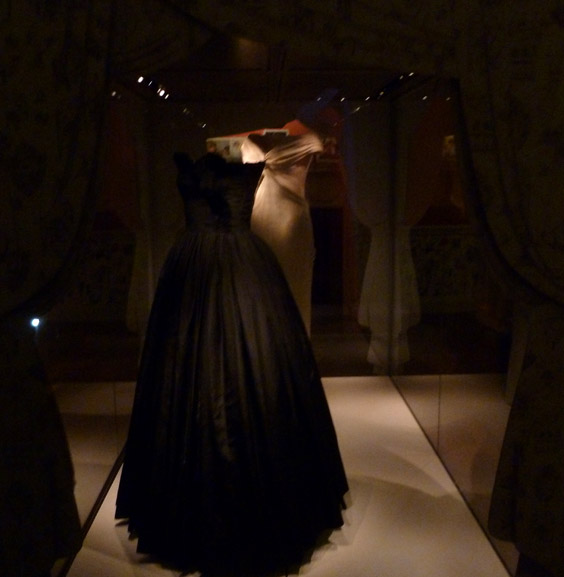 A selection of Princess Diana’s ball gowns – always in style!

An artistic and whimsical touch that I loved was the wallpaper showing sketches of scenes from Diana’s life.  It was a wonderful touch that captured the attention of visitors – and me, too! 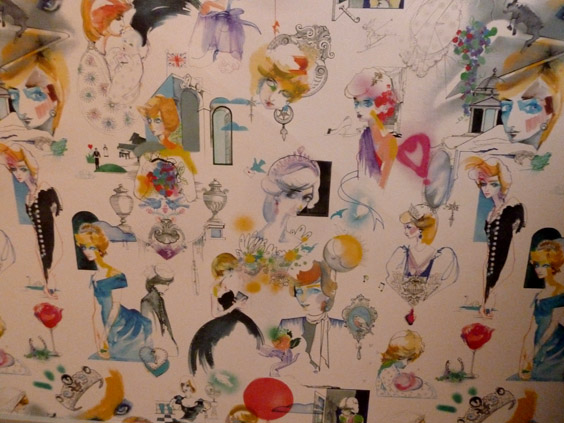 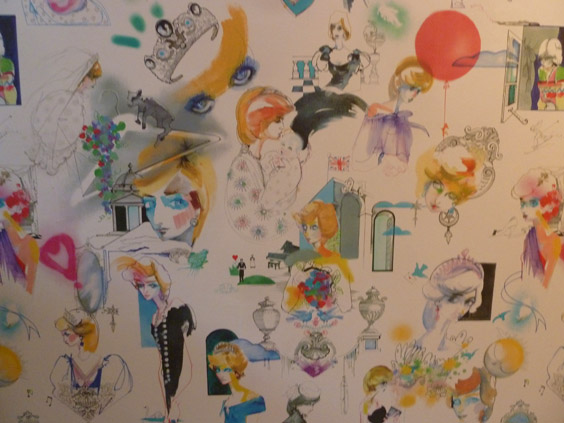 Kensington Palace is Perfect for Kids!

While so many museums are just one display after another, which can get boring for children, the newly designed Kensington Palace is so well done with beautiful lighting, a feeling of mystery, questions and visually intriguing displays that will appeal to children. There’s simply so much going on! 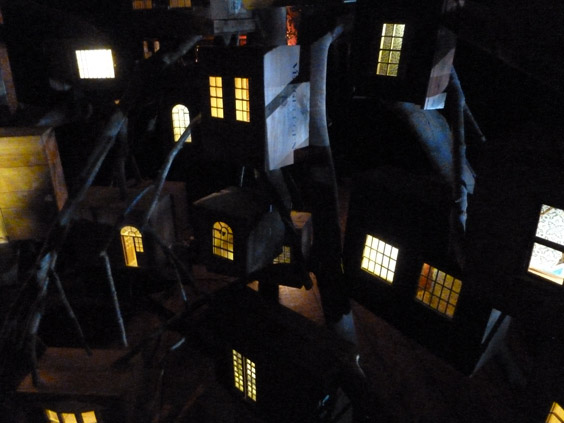 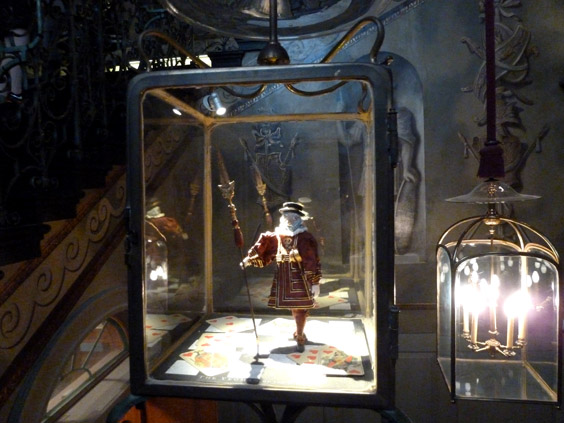 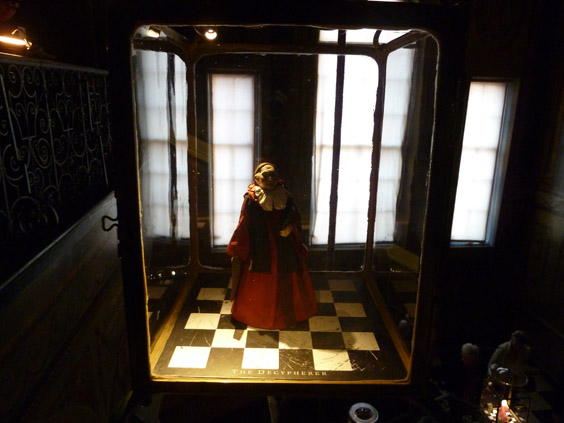 Delightful lantens with royal characters inside

Kids of all ages will get a kick out of the charming royal signs for the loos!

We love the feel of being in a living and working royal palace. If you look closely, you’ll spot signs that are reminders of all the work that goes on behind the scenes at Kensington Palace. 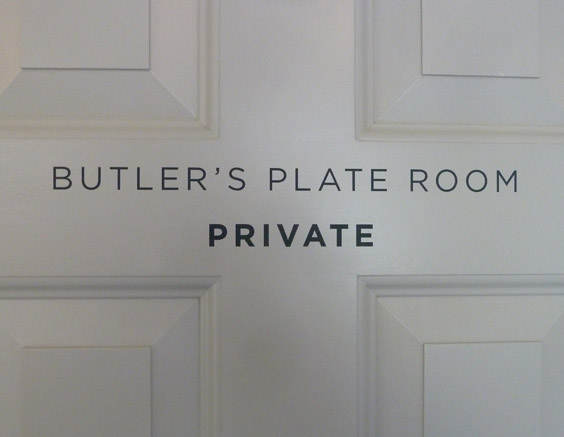 Behind this private door is where the royal silver is stored!

The newly redesigned Kensington Palace is a huge success. It’s modern, fascinating, and above all, it endures. This is where Will and Kate will live after Princess Margaret’s apartments are remodeled, and the latest news reports Prince Harry has also taken up residence at Kensington Palace. The Duke of Gloucester, currently 21st in line of succession to the throne, also lives there with his wife Birgitte.

After your visit, there new Palace café is a nice spot where you can sit and enjoy the gardens. Or stop by Queen Anne’s 18th-century Orangery nearby, which is where Pru Leith does her cooking magic. Experience a bit of the royal lifestyle during your next visit to London by visiting Kensington Palace. For the latest information on visiting or to book your tickets online, visit the Kensington Palace website.

Living the Good Life in Kensington: Shopping and Museums and Tea, Oh My!