So, dear readers, it’s been a rip-roaring ride through the history of Tea and a step-by-step guide on the best way to make oneself a superlative cup of the good stuff. I don’t know about you, but I’m feeling quite tired. Arguably too tired to even switch on the kettle and brew myself a pot of the aforesaid, caffeine-charged liquid ambrosia.

I may just have to let someone else do it for me. And if they’re going to do that, they may as well prepare a sandwich or two and possibly something sweet to accompany the tea. I could even be tempted to have a glass of champagne as well. After all this hypothetical effort, it would be rude not to.

Finally, this may have to happen in surroundings more agreeable and tidier than my chaotic living room.

Ladies and gentlemen, I’m going out for afternoon tea.* Since the mid 19th century a formal marriage of tea, cucumber sandwiches and cake has delightfully punctuated afternoons throughout the land. Under the large umbrella term of “Cake”, the gold standard is the humble scone. Plain or sprinkled with sultanas, these are bready, muffin-esque vehicles upon which to liberally spread fruit jam and lashings of clotted cream. Oh, and then there are the pastries. Tempting pastries served for dessert with afternoon tea at the Ritz

Yes, it is as indulgent as it sounds.

And if you want indulgence, then it’s best we head off to Piccadilly! If you’re staying in our Mayfair vacation rental, you’ll be within a stone’s throw of not one, not two but THREE titans of London’s afternoon tea scene; Fortnum’s, the Wolseley and the Ritz.

Should you be shopping for tea at Fortnum’s anyway, do try the newly refurbished Diamond Jubilee Tea Salon. The “tearistas” are on hand to help you choose a light, medium or strong tea from the in-house collection that best suits their magnificent menu. Just dashing through as you pick up a few tea-based purchases? Then the more casual Gallery has a lovely spread that will fortify and soothe the weariest of shoppers. If you prefer a more continental aesthetic, something like Caffé Florian of Venice, the Café Central of Vienna or Budapest’s Central Kavehaz, then head on to the Wolseley. Its mahogany hued interior with accents of burnt caramel creates a luxurious spot to enjoy one’s high tea, especially as winter draws in. My favourite past time whilst nibbling on a crust less cucumber sandwich? Imagining which of the other patrons could have been Cold War spies a la Graham Green’s Third Man. Lovely interior of the Wolseley in London

For those with a penchant for foliate swags, cartouches the occasional coquillage and swathes of opulent gold drapery, someone who maybe goes a bit squishy inside at the thought of tight British formality in such lavish environs… A sumptuous setting for afternoon tea at the Ritz in London

…then why on earth are you still reading this? Why aren’t you already at the Ritz?

A short bus ride to the Strand will take you to another elegant establishment held in great regard by the high tea aficionados of London. The recently refurbished Savoy Hotel sits upon the original site of a medieval palace, a 16th-century hospital and a “colony of Jesuits”. That’s almost 1,000 years of history to ponder whilst you enjoy your cup of tea, attended to by some of the marvellous people in this clip below:

Ah, afternoon tea. How much do I love thee? Let me count the ways…

*A small note; many, many scones were consumed and much champagne tea imbibed all in the name of research, dear readers. You wouldn’t expect anything less from me, would you?

Zoë F. Willis is a London Perfect reservationist, writer and Londoner. Visit her blog Things Wot I Have Made to find out more about Zoë’s many creative talents!
Photo Credits: Afternoon tea by Annette White, Afternoon Tea at the Ritz desserts by Lucy Downey, Fortnum and Mason scones by Mike Fleming, Wolseley interior by Cristina Bejarano, The Ritz Palm Court by Paper Balloon

Posted on Tuesday, November 27th, 2012 at 7:03 am in Food & Drink. You can follow any responses to this entry through the RSS 2.0 feed. You can leave a response, or trackback from your own site. 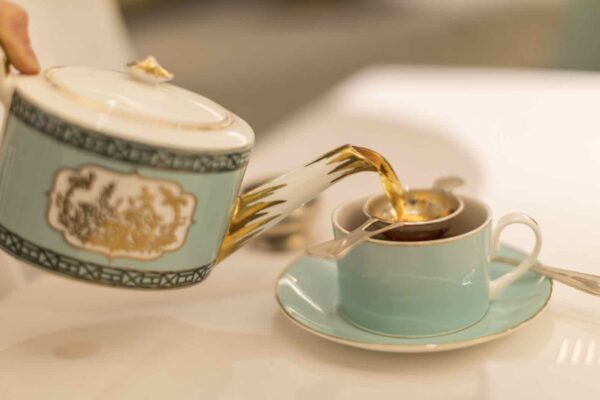 Baby, It’s Cold Outside: 5 Afternoon Teas in London for Christmas

2 Responses to “Guide to Afternoon Tea”