The glass covered atrium of the British Museum

Ah, I can hear it now. The gentle refrain of Rule Britannia. For ‘tis time to visit Britain’s premiere bastion of culture, a temple to imperialism and home of the most spectacular collection of … well, stuff, in the world.

And when I say stuff I mean everything from Byzantine ivory plaques to contemporary African sculpture, a North American otter pipe to Anglo-Saxon helmets. There really is something for everybody.

But how did this incredible collection come about? What were the origins of London, nay Britain’s, arguably the planet’s ultimate cultural repository? (I think you’ll find the hyperbole is justified). The story begins in 1753 when Sir Hans Sloane bequeathed to the nation his collection of natural history curiosities as well as prints, drawings, coins, cameos, manuscripts etc etc etc etc. This—in addition to the library of King George II—became the core of the British Museum and Library.

The collection’s original home was in the 17th-century Montague House, and soon more objects found their way to Bloomsbury. (The Elgin Marbles anyone?) In 1823, and with the acquisition of George III’s library, it was decided that something had to be done; Montague House just wasn’t suitable enough to convey the fabulousness and confidence of Victorian cultural sensibilities, never mind being too small to show all the baubles acquired as the Empire expanded.

Cue Robert Smirke (don’t laugh … he was a very serious chap), an awful lot of Neoclassical architecture, lashings of Corinthian columns and a temple of learning that the nation could be proud of. And we still are. Smirke’s portico and the impressive Progress of Civilisation by Richard Westmacott are what continue to greet Brits and throngs upon throngs of visitors to this day. The suitably grand entrance to the British Museum

That’s the potted history covered. What about the visiting the place? You may have a penchant for Medieval buttons and belt buckles. Like I do. In which case I suggest going to see the Chalcis Hoard. Or maybe you’ve another specialty you want to see and thus will make a beeline for the specialist gallery in question.

You could simply follow the crowd and peer through the throng at the Egyptian mummies.

People, it’s time to live a little. The BM has a bajillion rooms. Don’t constrain yourself with tedious things like chronology or mob rule. Therefore I suggest you do the following: 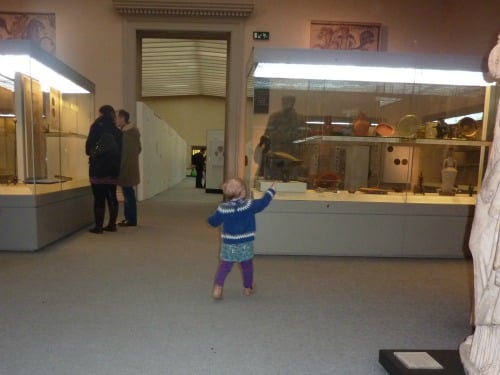 Visiting the British Museum with a toddler

The variety of stuff you’ll discover together is amazing. For example a lot of the vitrines have thingamy-what-nots on display at ankle height. Like a 2nd-century ceramic child’s rattle in the shape of a pig. Perfect for curious toddlers. A child’s toy from he 2nd century

Numerous staircases in the Museum provide the most cultured work-out for adults and little ones alike. Without a toddler I’d never have thought to look at the Chinese ceramics and found these beautiful Song Ru pieces. Wrong. By almost a thousand years.

So throw caution to the wind, step away from the mainstream tours and borrow a toddler. You’ll never look at the British Museum in the same way again.

Posted on Tuesday, January 29th, 2013 at 9:38 am in See & Do. You can follow any responses to this entry through the RSS 2.0 feed. You can leave a response, or trackback from your own site. Beyond the British Museum: The Best Small Museums in London

British Museum – Life and Death in Pompeii and Herculaneum