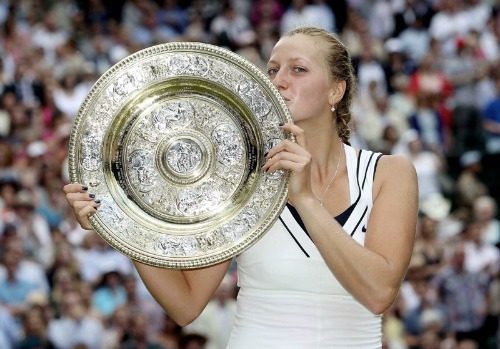 A lovely bit of silverware and a happy recipient, pleased with all her efforts during two weeks of superlative tennis.

Tennis whites? Check. Perfectly manicured tennis lawns? Check. More strawberries and cream than you can shake a stick at? Check. Oh, and a few rather good tennis players? Check, check and thrice check.

It must be Wimbledon (June 24-July 7), the world’s oldest tennis championships. In 1877 the All England Croquet and Tennis Club in Wimbledon announced that it would hold an amateur tennis competition. At this time tennis was proving a very popular pastime amongst the great and the good of England, much more so than croquet, the original sport that the club was originally intended for.

The first competition at Wimbledon had 22 competitors (all chaps. Nary a female to be seen. What would they have said about the likes of the Williams Sisters or Sharapova I wonder?) each paying £1, 1shilling entrance fee and they had to bring their own tennis whites and racquets. Fortunately the club would provide the balls. 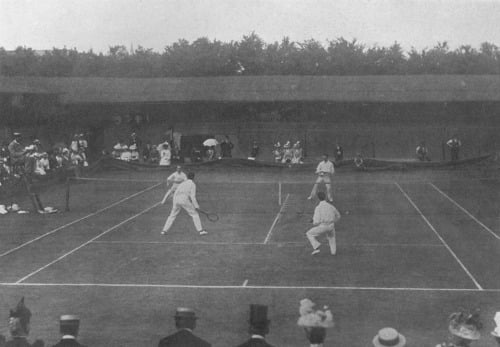 Tennis at Wimbledon in 1897. Not much has changed, has it?

As for attendees, well, the 200 who did come clearly prompted the organizers to think “hang on, we might be on to something here” as the competition continues to run 136 years later. Today it is one of the four international Grand Slams (The Australian, French and US Opens are the other three) with just slightly more players and attendees. This year there will be 128 men and 128 women in the singles competition (256 players so far…) with another 176 players all paired up for mens’, womens’ and mixed doubles. Which makes 432 in total, although some of the singles players might be in the doubles competition as well.

Are you still with me after that rip-roaring adventure in basic mental arithmetic? Then hold on to your hats for the increase in attendees. From 200 to 484,805 (2012 figures). Oh, and don’t forget the 869 million watching on their televisions around the world. Stage fright simply isn’t an option for the competitors. 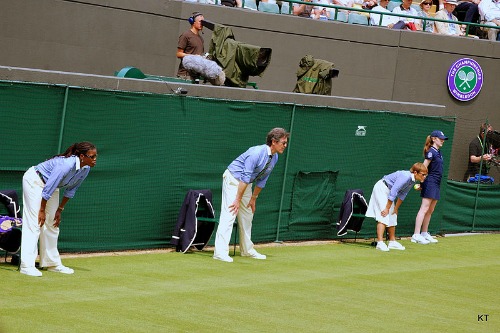 Line judges at Wimbledon. As if the poor players need any more scrutiny!

Good thing there’s a bit of prize money to compensate for that insane level of pressure. Let’s just say it’s worth one’s while to be a First Round Loser in the men’s single competition – £14,500 worth in fact – whilst the winner can enjoy a cool million or so sterling. Not bad, eh? Hard work, I’ll grant you. Harder than sitting here writing about said prize money and associated tennis. But still, not bad for some very hard graft. 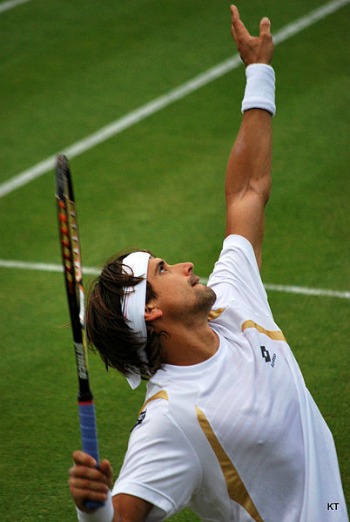 You want an 140mph ace down the centre of the court? Coming right up.

And what entertaining graft it is! There’s something very evocative of an English summer in the sound of a tennis ball being struck at 140mph on grass. For all its grace, elegance and chic white ensembles, tennis is an intensely tactical game incorporating a range of skills from subterfuge and feints to brute force and undiluted fury (John McEnroe in 1982 anyone?). It is on these hallowed lawns of South London that bloody battles are fought and won, coups staged and secular kings and queens crowned all whilst one watches in awed silence, probably with bated breath and a loaded spoon of strawberries and cream forgotten in the tense delight. 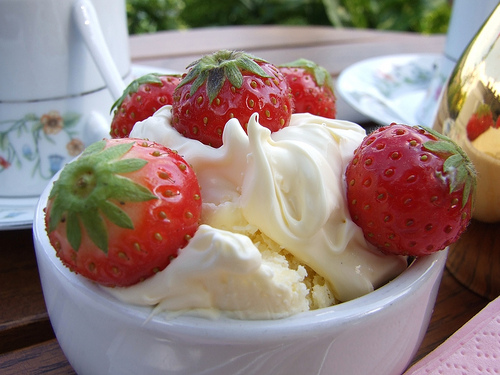 Don’t forget to enjoy your strawberries and cream, even when the tennis is at its most tense.

Oooh look! Isn’t that Cliff Richards / Princess Anne / Elton John (delete where applicable) over there? Oh dear. They appear to have dropped their spoon in all the excitement.

Posted on Saturday, June 22nd, 2013 at 7:48 am in London Events. You can follow any responses to this entry through the RSS 2.0 feed. You can leave a response, or trackback from your own site.