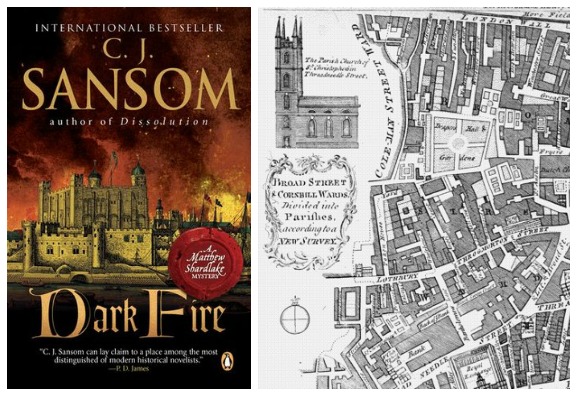 I love a good mystery and if I can combine it with some gold old history, even better! I just finished a 500 page novel by C.J. Sansom called Dark Fire and I recommend it highly. If you’re coming to London, it’s a pleasurable “must read” about London in the 1500s, Henry VIII and the beginning of The Reformation. This was a time of tremendous upheaval in England, begun by Henry’s desire to divorce Catherine of Aragon because she couldn’t bear children. The Pope in Rome refused to grant a divorce, so Henry demanded the Archbishop of Canterbury to do so. This caused a break with the Catholic Church in Rome and effectively the establishment of the Church of England.

Sansom has researched the period thoroughly and you see, smell and hear historic London as you read  – from ordinary working people, market stalls, dockers loading ships to the smells of the streets and the sewage dumped into the Thames and even the terrible poverty and the very beginnings of a constabulary.

The hero is a lawyer named Matthew Shardlake who takes on a case to defend a young girl accused of murder, and must find the secret to Greek Fire to gain her a reprieve. Good old mystery – history about the legal system in London, the Temple were all had offices –  rough justice, prisons and horrible conditions. 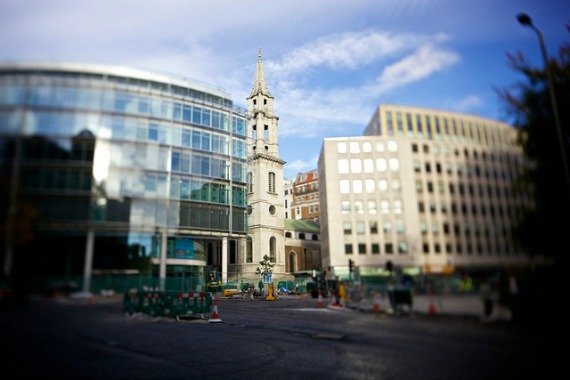 Old and new on Cheapside in London

I loved especially how the streets in the City of London, known as The Square Mile, came back to life. Now filled with banks, insurance offices and businesses, this is where London began. When I worked in the City myself, I loved strolling down the aptly name streets of this once biggest market area:  I got off at Mansion House where the Lord Mayor of London lives and walked along Bow Lane – you’re a true Cockney if you’re born within hearing of the bells of Bow Church. 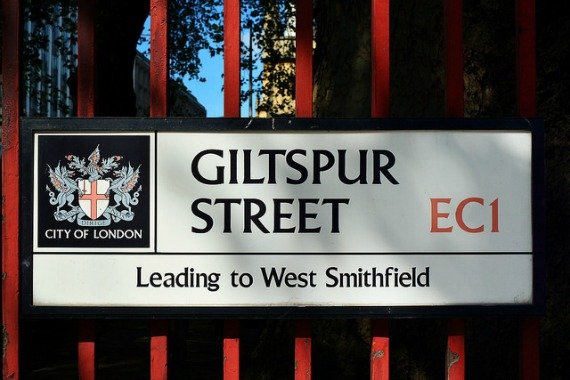 Down Cheapside – which meant market place – you’ll find numerous alleys with delightful names dating from before the 1500s.  When you visit St. Paul’s definitely have a walk around the streets and think about how London was 700 years ago. I smile to contrast the gorgeous architecture of today such as The Gherkin and the Shard and the Telegraph with the street signs telling you what used to be sold on these streets before even the Great Fire of London: Milk street, Poultry Lane, Pudding Lane, Puddle Dock, Camomile Street, Cripplegate, Cornhill, Wormwood Street,  Threadneedle Street where the Bank of  England stands now. There’s such a contrast of old and new, yet the history of London is ever present. 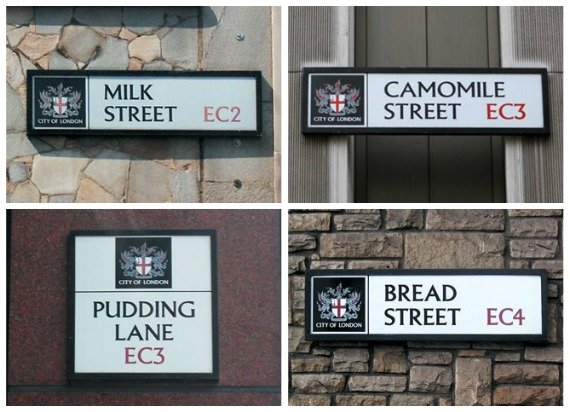 You might get hungry strolling around the City of London!

From the history of London through C.J. Sansom’s mystery to present day fun and discoveries in London! I also got a kick out of these fun placemats with the food street names from the TFL London website. Take a taste of London home with you … or make your own London Street name sign.

Posted on Friday, December 12th, 2014 at 5:32 pm in London Living. You can follow any responses to this entry through the RSS 2.0 feed. You can leave a response, or trackback from your own site. 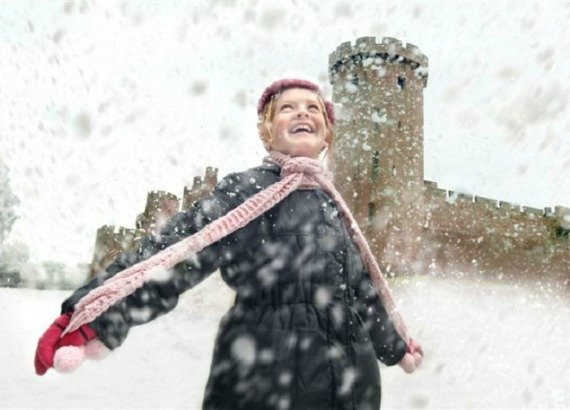