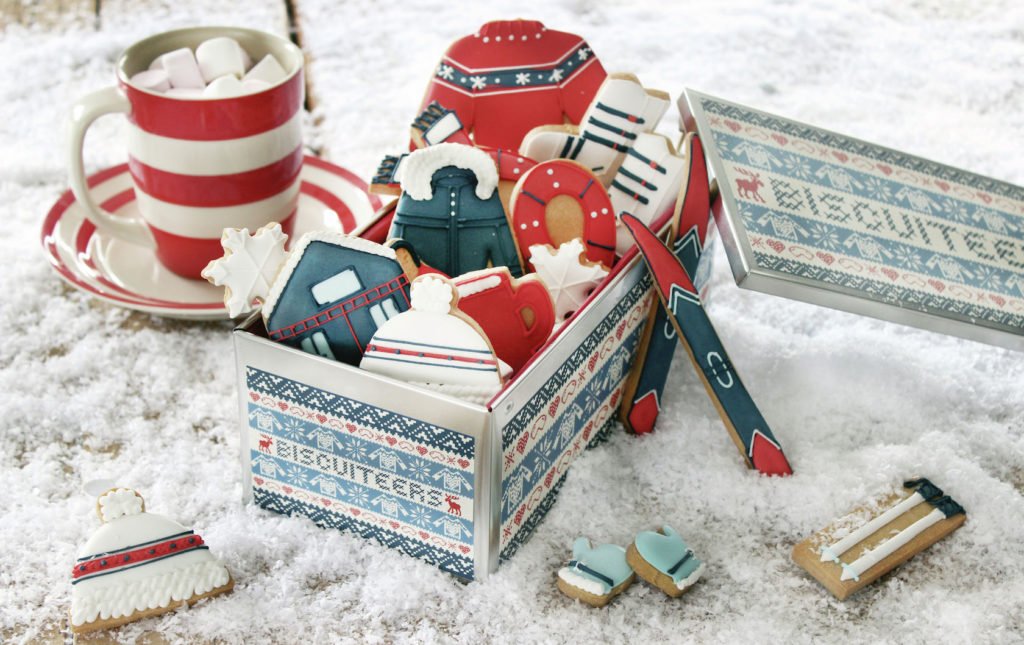 Christmas biscuits aren’t to be skipped.

Brandy-soaked fruitcake lit on fire and sweet dates wrapped in smoky bacon may sound unusual, but for Britons, that’s just the taste of Christmas. From the savory to the sweet, we’re rounding up all of the amazing things to eat during the holiday season in London. Bring your holiday spirit and your appetite!

Things to Eat During the Holiday Season in London 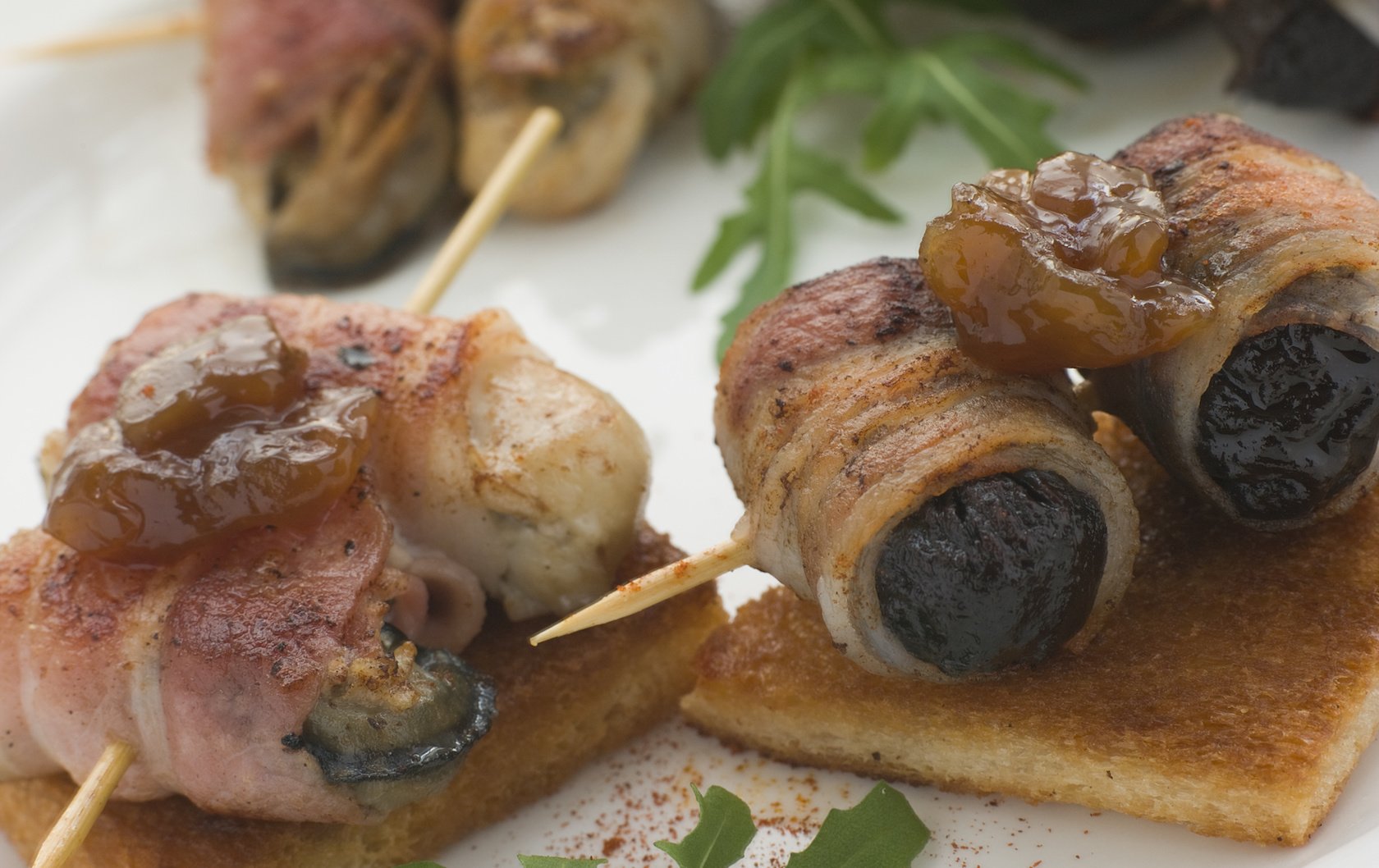 Though they may not sound Christmasy, devils on horseback (bacon-wrapped prunes) are a quintessential British holiday appetizer.

Though the name is more befitting of Halloween than Christmas, devils on horseback, or bacon-wrapped dates, are a typical holiday appetizer. This festive canapé is usually served hot and speared on toothpicks. Variations include swapping the dates out for any number of dried fruits like prunes or apricots. There’s also a variation called angles on horseback, which swaps the dates out for oysters. 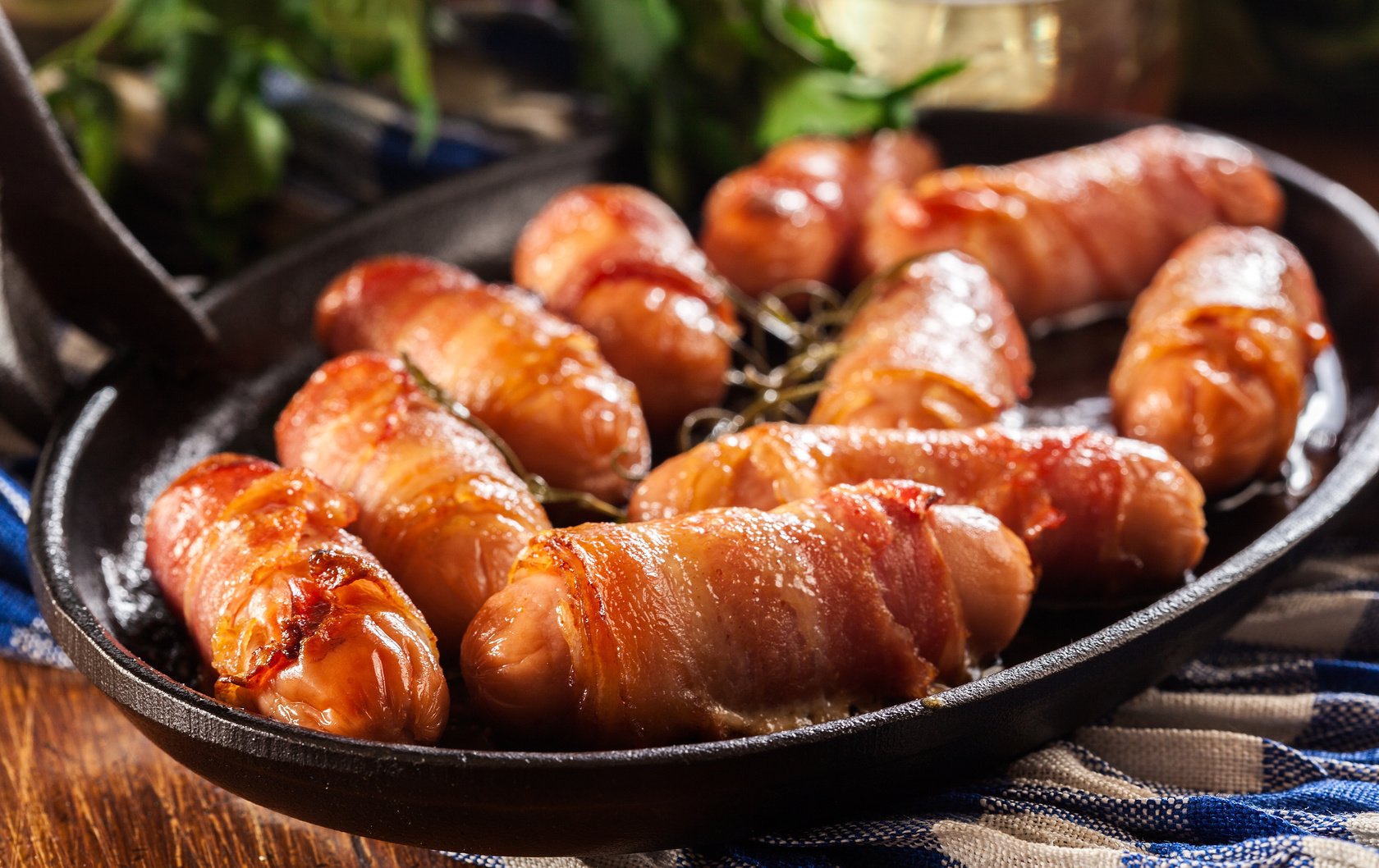 Unlike the American version, in the UK, pigs in blankets come wrapped in bacon—not pastry. 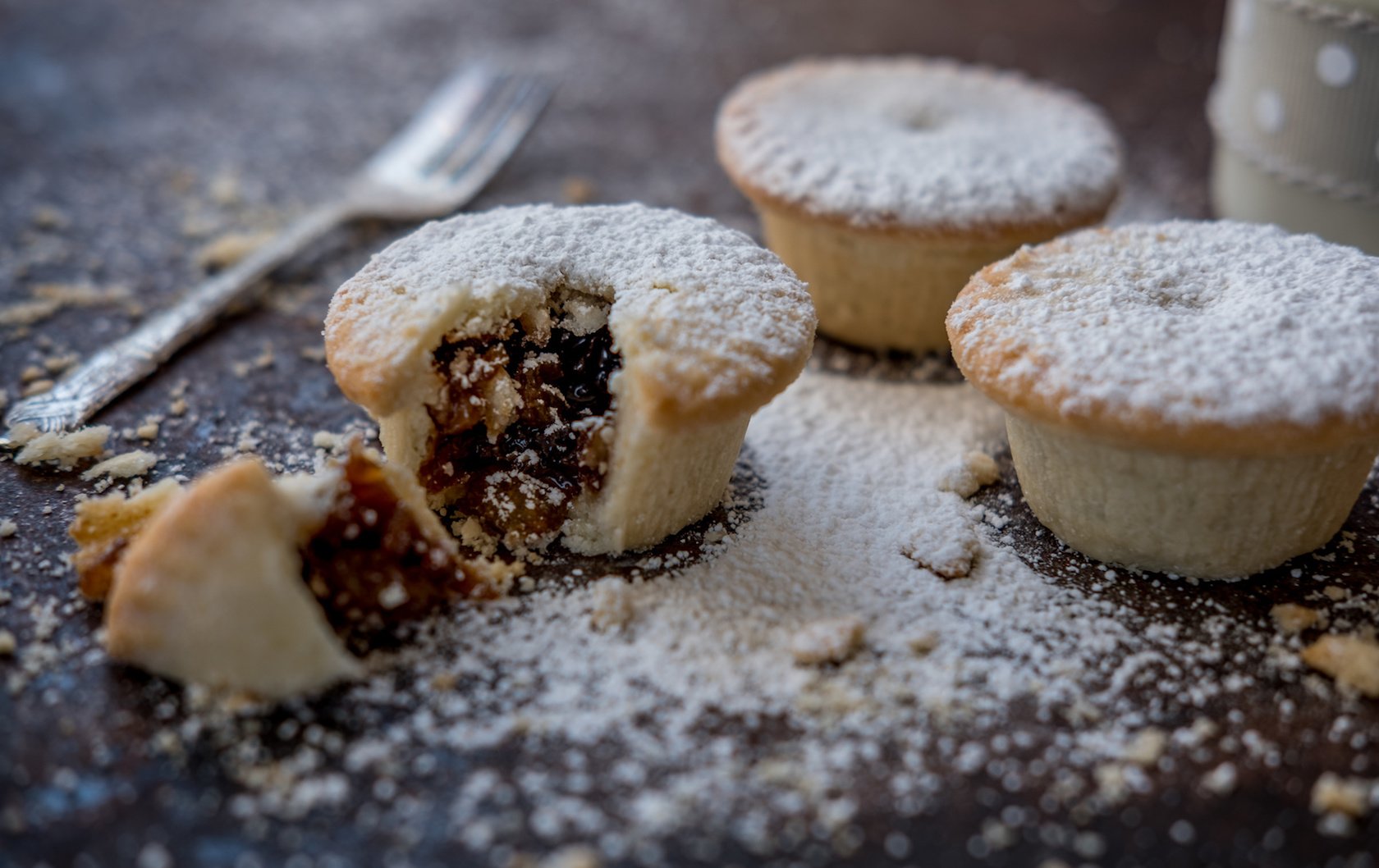 Mince pies are one of the most traditional British Christmas desserts.

It’s simply not Christmas without mince pies! These little pastry pies stuffed with dried fruit compote are one of the traditional things to eat during the holiday season in London. For a rustic farm version, stop by Daylesford in Notting Hill. This organic Gloucestershire farm shop sells the most lovely mince pies in the holiday season. They also have some of the best coffee and teas in Notting Hill as well. And, the Daylesford shop and cafe is just a short brisk walk from the one bedroom, one bathroom Leicester apartment. 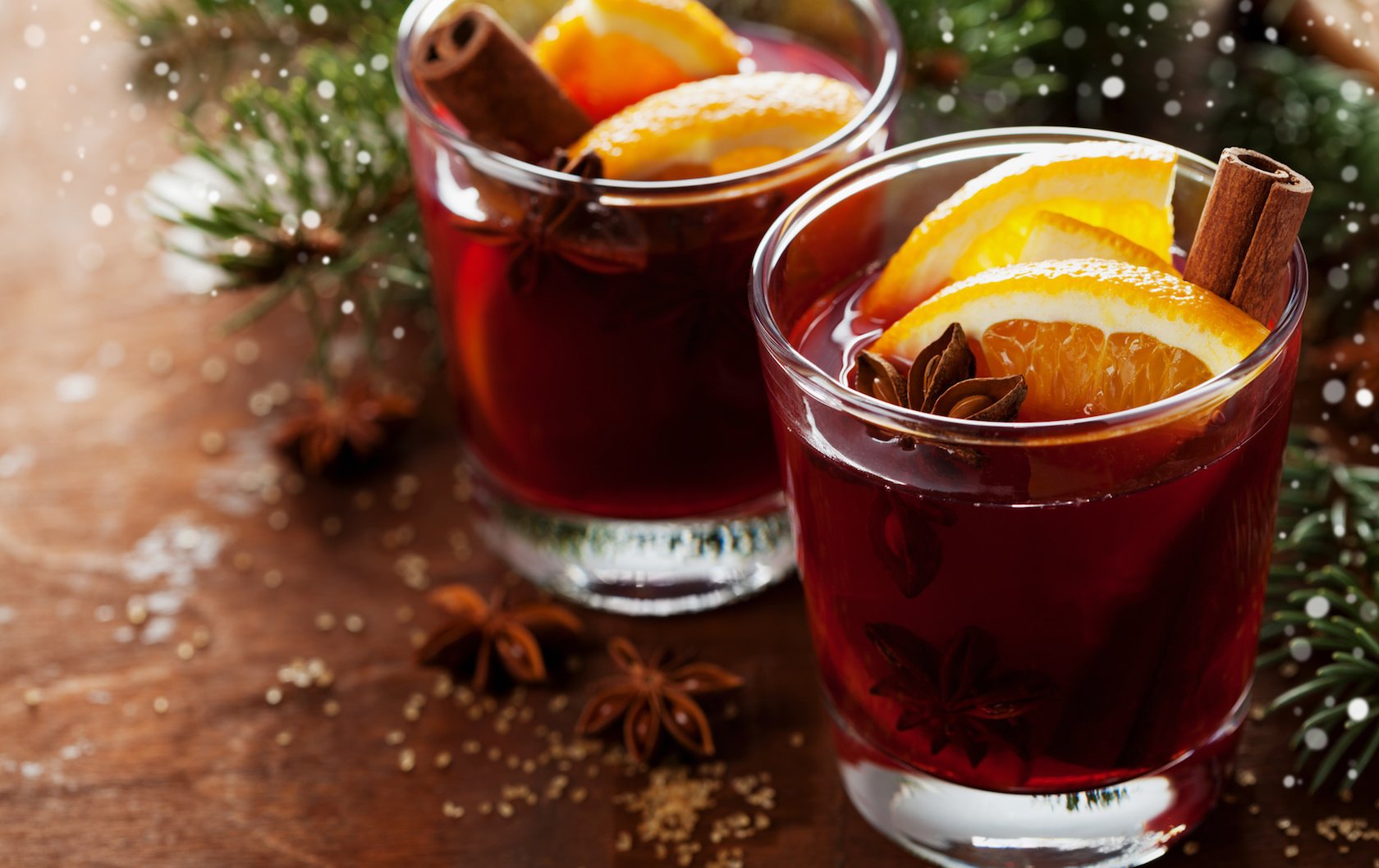 Hot wine with warming spices? Yes, please! As soon as there is a nip in the air, the mulled wine starts to pour. Try sipping a hot mug in a cozy pub or grab a cup to go at one of London’s many Christmas markets, like the Belgravia Christmas Market. It’s hosted on the lovely Elizabeth Street, which is very close to the charming, three-bedroom Belgravia apartment. 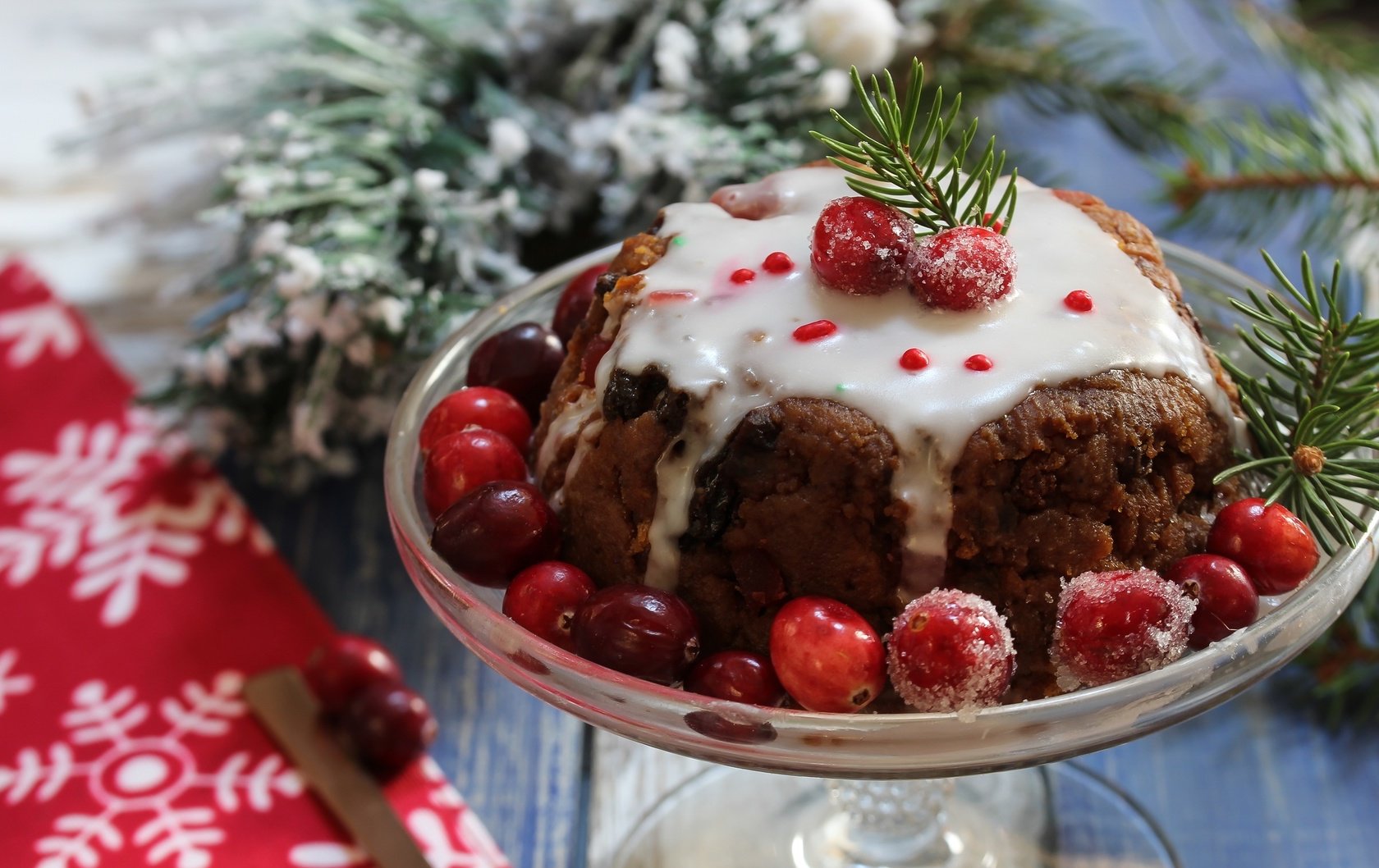 Every menu ends with Christmas pudding.

Christmas pudding is the typical dessert on Christmas day. It follows the main course of roasted turkey or goose with all the trimmings. This dessert has medieval roots, and it’s basically a boiled fruitcake infused with spices and dried fruit and often brandy. To cook it, it’s usually steamed for several hours, then once ready, it’s sometimes “fired,” which is when it’s dosed with a bit more Christmas spirit then lit on fire for a few moments to caramelize the exterior. It is often accompanied with custard or cream. 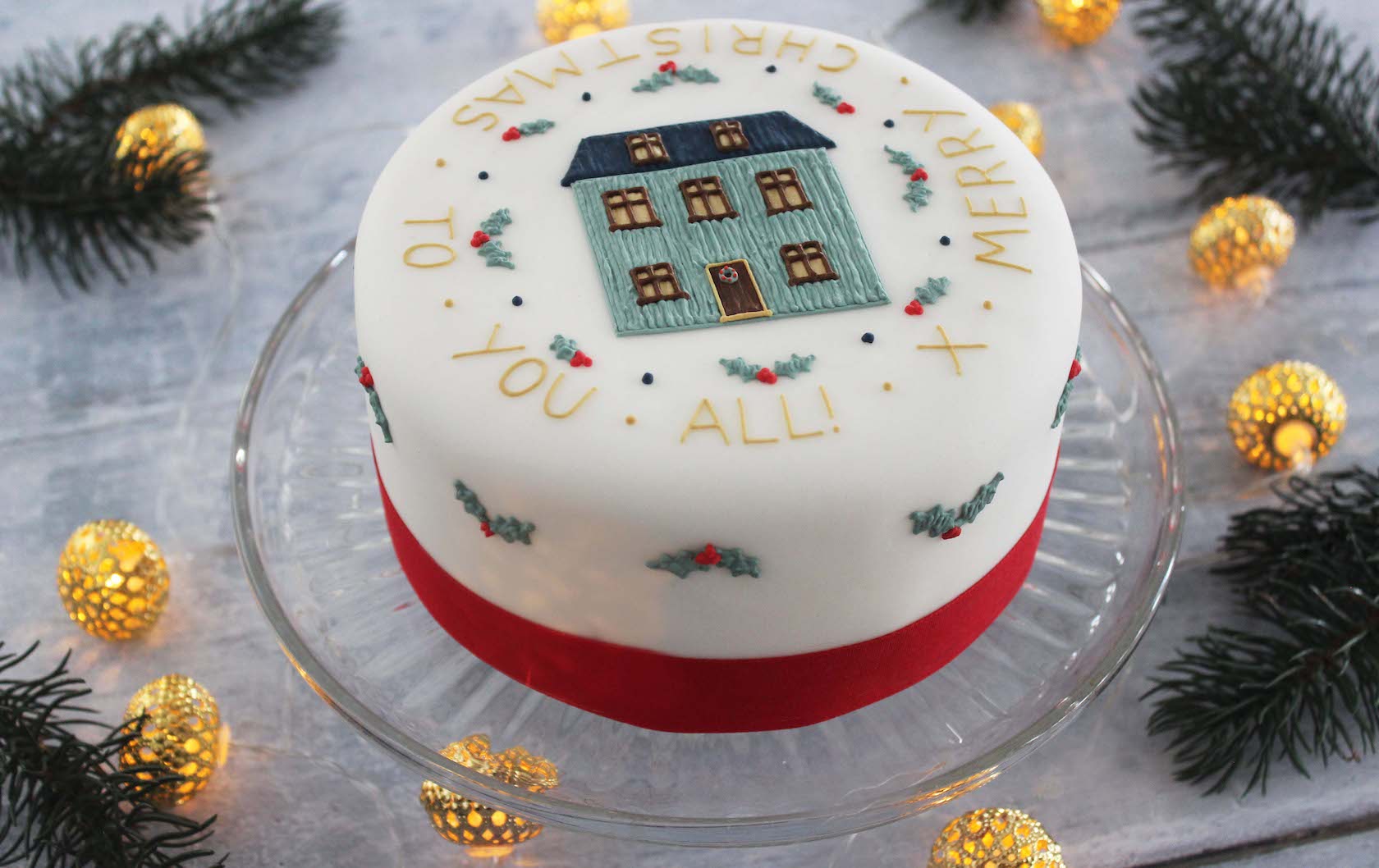 Fondant-wrapped Christmas cake is another British-Christmas must. (Image courtesy of Biscuiteers.)

Don’t confuse Christmas pudding with Christmas cake. They are two separate holiday desserts, though Christmas cake another one of the most common things to eat during the holiday season in London. It can be described as a fruitcake wrapped in white fondant icing and ornamented with seasonal decorations. Biscuiteers in Notting Hill even makes a personalized Christmas cake where you can get a message of your choosing added to your Christmas cake. It makes an ideal gift or souvenir if you’re planning on returning home for the holidays, as the cake travels well. 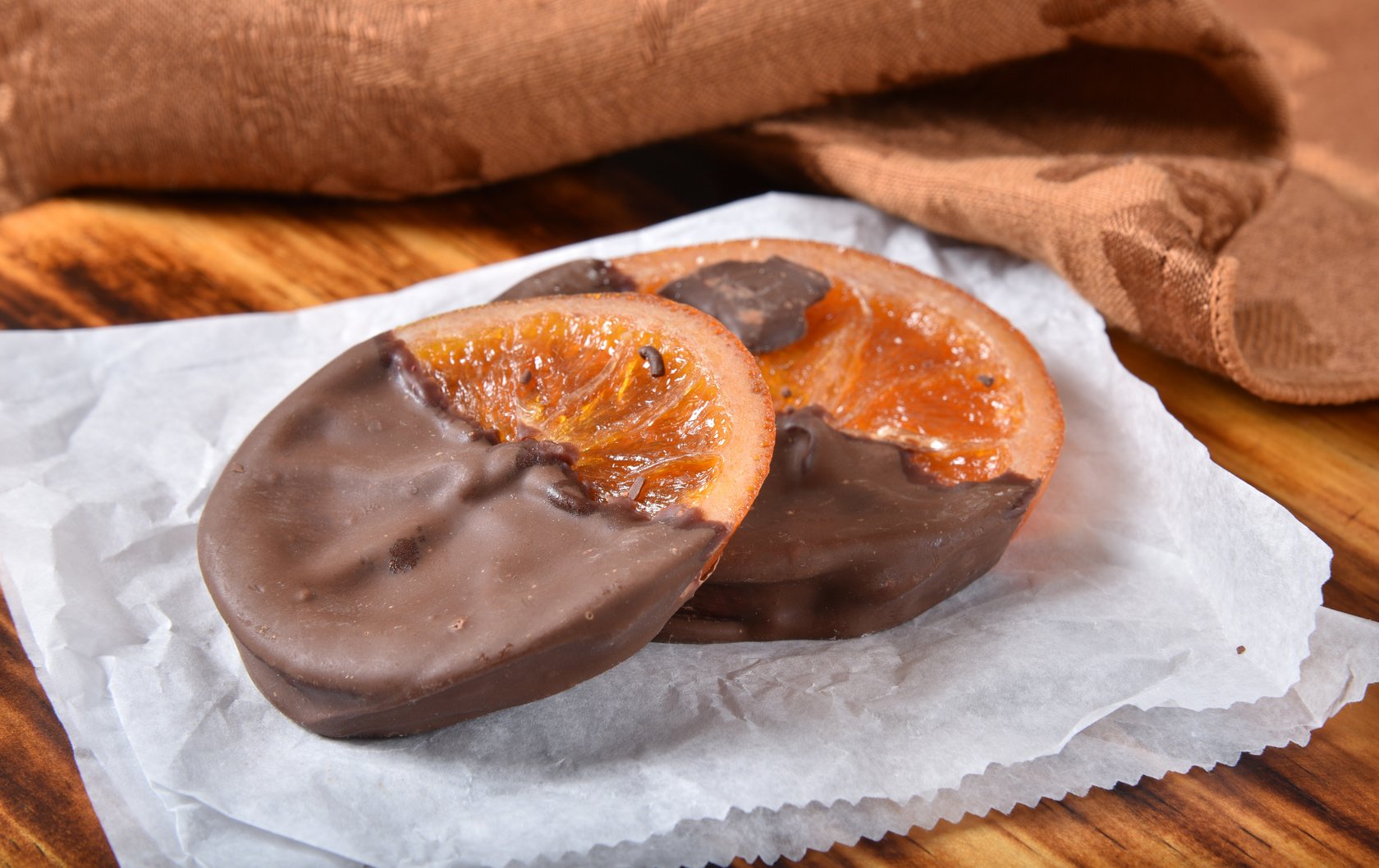 Is there anything more festive than orange and chocolate?

It was once traditional for children in England to get oranges in their stockings on Christmas morning. Nowadays, orange is still a prominent flavor of Christmas. (For example, both mulled wine and Christmas pudding often feature orange flavors or slices of orange.) Orange chocolate is especially popular this time of year. Terry’s Chocolate Orange, in particular, is a Christmas favorite in many British households. 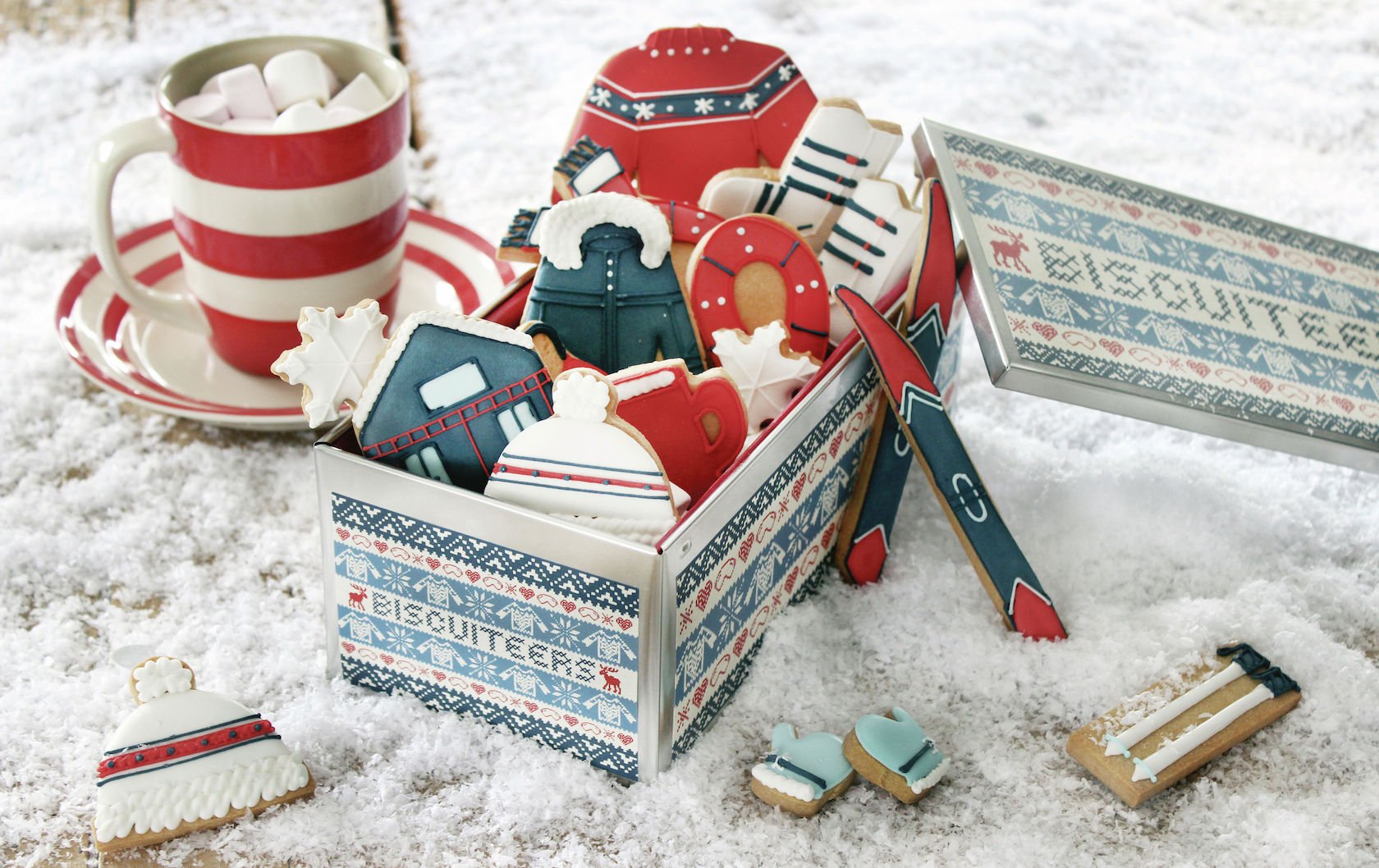 Christmas biscuits, from the old-fashioned styles to the fun and fresh versions (like these from Biscuiteers), are another delicious holiday treat. (Image courtesy of Biscuiteers.)

The Christmas tree became a staple in the British home largely because of Queen Victoria. (Read about other Victorian Christmas traditions here.) In those days, Christmas trees were often bedecked in candles, sweets and fruits. Christmas biscuits (or cookies) were also used to decorate the tree as well. And though we condone the eating of cookies all year round, Christmas is an excellent time to indulge in all of the festive varieties like this adorably decorated batch from Notting Hill’s Biscuiteers.

The festive food is only one of the many reasons to visit London in the winter. Contact London Perfect and we can help find the best apartment for you and your whole family to celebrate the season together. 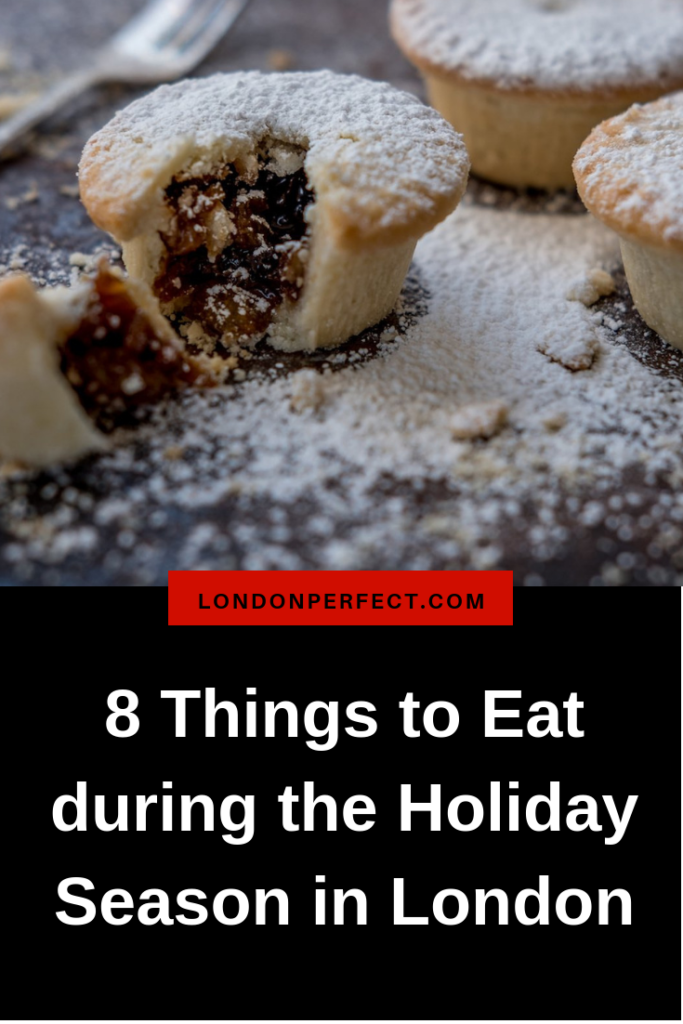 Posted on Monday, November 5th, 2018 at 6:44 am in Food & Drink. You can follow any responses to this entry through the RSS 2.0 feed. You can skip to the end and leave a response. Pinging is currently not allowed. 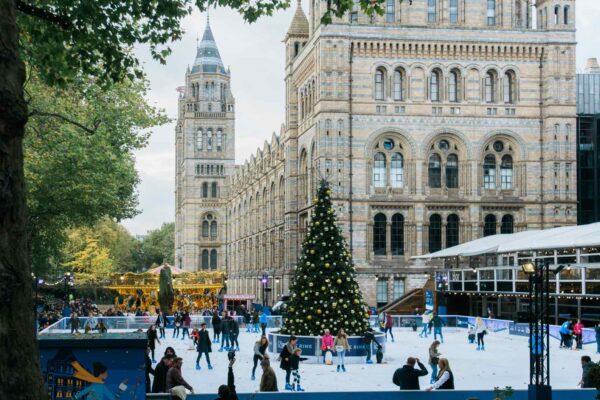 London’s Best Ice Rinks to Enjoy during the Holiday Season

Baby, It’s Cold Outside: 5 Afternoon Teas in London for Christmas