The Full English Breakfast – aka “The Fry Up” 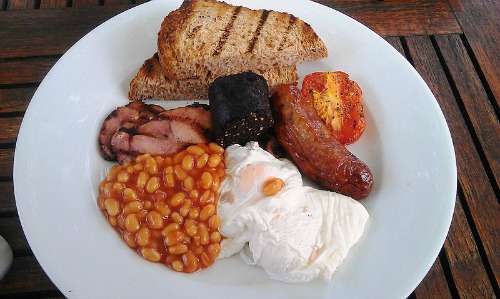 The full English breakfast … quite the feast!

Vegetarians look away now. This is going to get meaty and greasy.

Carnivores, can you smell it? Can you hear it? That’ll be the bacon frying. Oooh! Oooh! I can see some sausages and black pudding getting in on the act as well. And what’s that under the grill? Tomatoes and mushrooms? Manna from heaven. Is there something bubbling in a saucepan? Oh joy! We’ve baked beans. But wait … there’s more. I spy eggs joining all the meaty goodness in the pan. And one simply couldn’t let the remaining bacon fat go to waste; best use it to fry some bread.

Next thing to do is serve up and smother a corner of the plate (if there’s space) with brown sauce (HP Sauce is best). But before you pick up your knife and fork to tuck in you mustn’t forget the scaldingly hot, deliciously soothing Cup of Tea as an accompaniment. All of the aforementioned work will have been for naught without the tea. 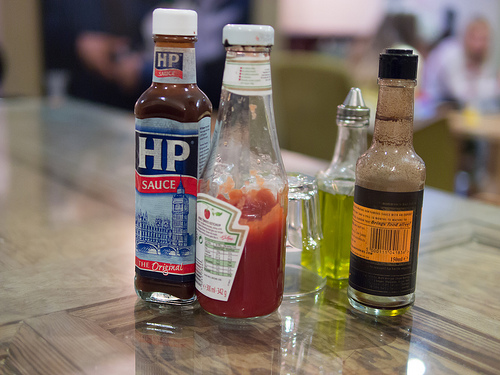 HP Sauce, the condiment of kings.

London Perfect readers, I present the quintessential English Breakfast or “Fry Up”. This is the breakfast of princes and paupers, empire-builders and dustmen, the cure all for a night on the town and the fortifying set up for a day of rigorous physical activity. Like hill walking. Or reading the Saturday papers.

Anyway, the point is an English breakfast is simply a must when you come to London. At least once, although to be frank you’ll be doing so much vigorous touristing (That is a real verb. As of now.) you could probably justify it daily. Now I will let you in on a secret; elegant dining establishments throughout this Fair Capital will offer you wannabe, poncy “Full Englishes” at silly prices. Do not succumb to the temptations of starched linen and waiters. Oh no. You need to go to a proper greasy spoon*, a “caff”.

When I say proper I mean an establishment with Formica tables and a menu that have been in situ since the 1940s or 50s. Said establishment should also provide – at no more than £5 – a lavish spread carousing Vikings in Valhalla would be proud of. 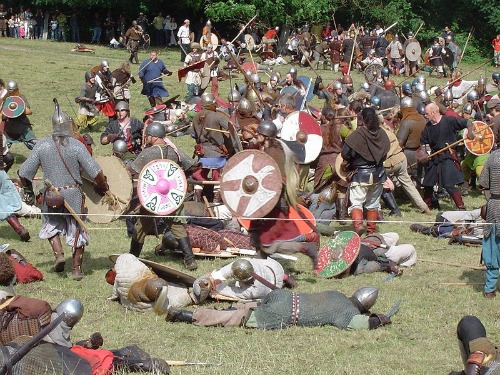 Forgetting the bacon with your Fry Up may have repercussions.

These caffs spurn modern technology, preferring to lovingly reconstruct their industrial hot water boilers that have been on site since the Battle of Waterloo. Websites?! Pfffff. These places deep-fry such technological ephemera in beef dripping before serving them up with chips and, you guessed it, more tea. That’ll be 80p, please.

As for the clientele, they have to be the salt of the earth variety, the kind that you’d want on side if civilisation crumbled. Useful, working people. Who know what to do with a hammer and when to use it should zombies invade.

The sort of people who need breakfasts like these. 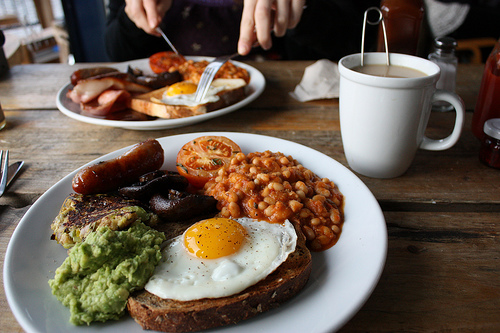 The English Fry Up. Breakfast of zombie fighters.

Feeling adventurous and hungry? Then let me tell you about London’s top greasy spoons. The first is the Regency between Pimlico and Victoria, on Page Street in SW1. I won’t wax too lyrical about it as the video below, because Harry Wallop at the Daily Telegraph already has.

If you’re planning a visit to the British Museum then City Snacks (29 Theobalds Road, WC1X) just north of Holborn station is the place to prepare for the cultural onslaught. This is one of numerous caffs run by second or third generation Italians. The service is exemplary, the bacon is superlative and if you can’t face tea and greasy deliciousness again but are being suitably supportive of your spouse then the owners can whip up a substitute cappuccino and fruit salad prontissimo.

In Soho is the comforting Bar Bruno (101 Wardour Street, W1). Their English Breakfasts are what keep the rather lively local populace and equally energetic nighttime visitors going. One cannot dance the night away on an empty stomach nor survive the next, bleary day without the promise of a decent fry up.

Far out East on 332 Bethnal Green Road, E2 is E Pellicci. Established in 1900 this proper East End caff has been serving up all manner of luscious, hearty and greasy fare to uncountable throngs of happy punters. As the name suggests, it’s those Brits of Italian heritage running the show again and their traditionally British fare is accompanied by a number of Italian house specials. 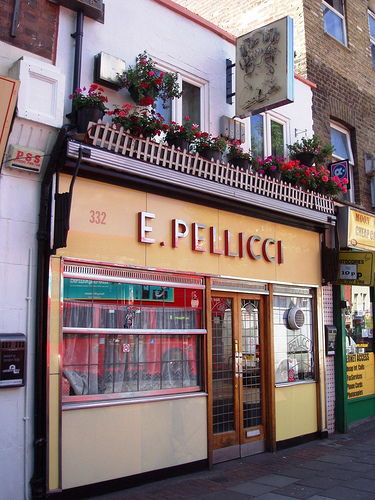 This is the sort of place that will keep the fussiest and the most laid back of gastronomes content. And if you’re popping along to the Columbia Road Flower Market on a Sunday anyway, why not take a short stroll to E Pellicci’s for a suitably British breakfast?

So I ask you to throw caution and the fear of cholesterol to the wind (for at least once in your life) and embrace the delicious marvelousness that is the English Breakfast. It truly is food of the gods. I kid thee not.

* Amusingly the phrase “greasy spoon” is actually an American import into the British vernacular.

Posted on Tuesday, October 1st, 2013 at 1:51 pm in Food & Drink. You can follow any responses to this entry through the RSS 2.0 feed. You can leave a response, or trackback from your own site.

Quintessential British Cuisine: What to Try in London

The Royal Wedding — What is it About English Hats?